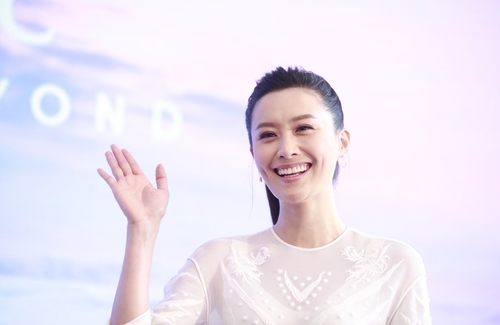 Fala Chen (陳法拉) dished on her career development in Hollywood at a Cathay Pacific event in Hong Kong today. The 37-year-old actress, who announced her departure from TVB back in 2014, often flies back and forth between Hong Kong and New York after enrolling in The Julliard School to study drama. Her journey has been nothing short of extraordinary, especially when she became the first Chinese to receive a Master of Fine Arts in Drama with straight A’s. Her hard work paid off when she landed a role in the upcoming HBO miniseries, The Undoing, not long after graduating – marking her official debut in Hollywood.

Having been missing in the Hong Kong entertainment scene for quite a couple of years, Fala expressed, “I really want to film something in Hong Kong, it’s been awhile. The last time I was in Hong Kong, it was for a stage play, which requires a different way of acting. I’m really looking forward to acting in Cantonese – I haven’t done it for five years.”

She believes she can show something new to the Hong Kong audience with the skills she’s picked up during her time at Julliard. Thus, she’s awaiting the day she can work with Hong Kong actors again, however, Fala said TVB has not contacted her yet.

The actress shed some light on the competitiveness of the American entertainment industry and revealed she did over ten auditions since graduating. “It’s stressful over there because of the strong competition. America is so big, but so many people are competing for the same one or two roles, so the success rate is low. We have to face many setbacks and failures, so I think I’m pretty lucky for landing a role shortly after graduating,” Fala shared.

On the differences between Hong Kong and America, Fala said the cultures are different. “They are both challenging in their own ways, and both have their own quirks,” she stated. “The filming schedule abroad is very lax since the longest we’ll film for is 10 to 12 hours. But Hong Kong is very efficient and flexible, whereas for abroad, you can’t change anything once the arrangements are in place.”

She continued, “The paparazzi are on your tail in both places, but it depends on how big you are. Since no one really knows who I am over there, I don’t have pressure.”