Although mainland Chinese mystery period drama Wind from Luoyang <风起洛阳> has yet to begin its production, drama over the alleged casting choices are in full swing. At the last press conference, the production company announced they would invite Wang Yibo (王一博) and Victoria Song (宋茜) to star in the series. Now, an online rumor has it that there will not be one but two male leads: Yibo and Huang Xuan (黄轩), and fans are not happy with this arrangement.

According to reports, the drama’s investors wanted Yibo as the main lead because his current popularity and commercial value may bring the series success. However, the production side has taken a liking to Huang Xuan’s image and acting and believes he is the perfect fit for the role. To these speculations, Huang Xuan’s fans immediately expressed that they do not want this role to hold back their beloved actor and that it would be better for him to withdraw from the series if he is not playing the first male lead. 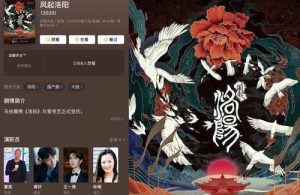 These comments have caused the fans of both Huang Xuan and Yibo to fight online, and it blew up when Victoria’s fans joined in as well. Now, Victoria’s name is no longer on the casting lineup online.

Adding on more trouble, a self-proclaimed fan of Yibo revealed a private chat he had with the drama’s screenwriter. During the conversation, the screenwriter expressed that Yibo deserves more than just a mere second male lead role with his immense popularity. He also claimed the production team disregarded Yibo for even thinking of suppressing him. In response, the screenwriter closed the chat after he frustratingly expressed that he does not have much of a say in the drama’s casting.

Shooting for the drama is reportedly commencing in October.