Felix Wong (黃日華) has made his first public appearance since confirming the death of his wife, former actress Leung Kit Wah (梁潔華), a few days ago. The actor was seen arriving at Universal Funeral Parlour, a funeral home located in Hung Hom, with his daughter Adrian Wong (黃芷晴) and two family friends.

While still in mourning of his wife’s passing, Felix greeted the press with a genuine smile through his face mask. He bowed his head and thanked the reporters for their concerns. He answered every question thoroughly as he firmly held onto his daughter’s shoulder, who teared up at the mention of her mother’s final wishes. 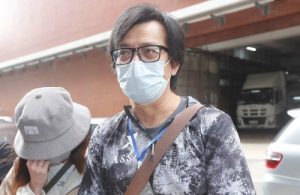 “I haven’t dreamt about my mother yet,” said Adrian when she was asked the question. “But last night, I did see a moth in our living room. It stayed with us throughout our conversations. I felt like it was listening to us.”

“We have all been supporting and taking care of each other,” said Felix. “We are okay. Do not worry.” Asking if his wife had any final wishes, Felix said, “She told me to take care of the pets, our daughter, and her mother. (Have you stopped work during this time?) I’ve been on a hiatus for a while. With the pandemic going on, it’s best to stop and handle the things that need to be handled first, such as my wife’s funeral arrangements. I don’t have a plan of when I’ll be back yet.” Felix said his wife did leave behind a will, but he hasn’t had the time to read it.

Adrian said she wants her mother to be reborn as her daughter. “Dad said mom had suffered a lot to raise me. She gave up her career for me, so I hope to be able to experience her role.”

While the death of his wife has been extremely hard on the family, Felix is in okay spirits. “It wasn’t a sudden thing,” he said. “We’ve been dealing with this possibility for the past three years, so we were prepared, and we were strong.”

Felix continued, “She was really amazing. Whether it was managing her career, her family, or even the pets, she was able to take care of everything and balanced everything very well. She was a very strong woman. She struggled so much in the last few years of her life, but she never said no, and she never gave up. She was strong till the end. She wanted to win this battle. The lesson she gave us was to never give up on life. Your life is very important.” 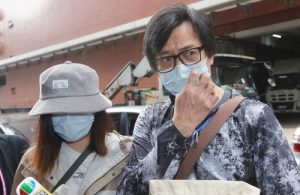 Asking if his wife was in pain when she passed, Felix said, “No. The most painful part of the process was over. When she was seriously ill, her organs were failing, but I could see that she was comfortable. She was smiling when we spoke with her. She passed away with a smile.”

Asking if his wife had any regrets before she left, Adrian immediately broke down. Felix said, “She was worried about not being able to witness our daughter getting married, and she was concerned about her mother. I told her she need not worry. Adrian is a big girl. She will take care of me, and I will be in charge of taking care of her mother.” Felix wrapped an arm around Adrian and said, “Look out for me.”

Felix and Adrian are currently busy with the preparations of Leung Kit Wah’s funeral. Adrian has already chosen her mother’s memorial portrait. “On Mother’s Day last year, I was able to convince my mother to get dressed to eat a meal with me. She didn’t want to be photographed, so I only have about four to five pictures of her. But last year, she dressed up and wore a necklace that had the words “good health” engraved on the stone. I chose that picture. I hope she’ll bring good health with her as she leaves.”

“There are still many things left to do,” said Felix. “We will be contacting all family and friends who want to see her one last time. We also understand that there may be things out of our control due to the pandemic.”