Former 1980s actress, Leung Kit Wah (梁潔華), passed away yesterday at the age of 59 after a seven-year battle with leukemia. Suffering from multiple organ failure, she was hospitalized in the intensive care unit since last week and her condition worsened rapidly. She was accompanied by her husband Felix Wong (黃日華) and daughter Adrian Wong (黃芷晴) by her bedside in her final moments.

Deeply grieving Kit Wah’s departure, Felix is still wrestling with his emotions and unable to accept that she has suddenly left this world. Despite this, he refused his assistant’s offer to make the funeral arrangements and insisted to personally take care of all the details. An attentive husband, Felix once admitted that taking care of Kit Wah during her illness is exhausting, but he would not let himself collapse when she needed him the most. The 58-year-old actor said, “I have to give the best life to the person I chose to love. I have to love, protect, and adore her!”

Married for 32 years, Felix and Kit Wah met on the set of 1980 TVB drama Yesterday’s Glitter <京華春夢>.  After getting married in 1988, Kit Wah retired from acting and forged a successful career in the insurance industry, becoming one of the top sales managers at her company. 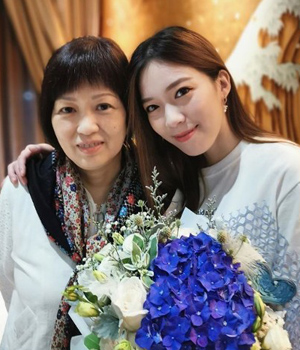 Diagnosed with leukemia in 2013, Kit Wah received five rounds of chemotherapy which caused her weight to drop from 120 to 97 pounds. Hoping she can receive medical treatment in privacy, the family kept her illness a secret for two years before eventually confirming Kit Wah had leukemia. In 2018, she received a bone marrow transplant and while her condition took a temporary promising turn, she again fell into a relapse and had to seek frequent hospital treatment over the last two years.

Hoping her mother is in a better place free from pain now, Adrian dedicated a loving post to her on social media, “I will carry on with the same determination you had, and try to control my sadness to continue living a good life. I will take care of [Dad] whom you have loved for 40 years! I love you very much…my bravest queen. I hope we get to see each other again soon–when you come back, you can be my strong and healthy daughter!” Thanking everyone for their concern, Adrian asked others to give the family space to mourn quietly.

Felix’s friends, Andy Lau (劉德華) and Hugo Ng (吳岱融), sent their condolences to the family. Actor Ricky Fan (范振鋒) said, “I know Felix is heartbroken. I hope he and his daughter take care!” While Felix did not disclose the details of Kit Wah’s declining condition, friends knew that he had been busily taking care of his wife daily in her final days.
Sources: On.cc [1,2,3], Sing Tao