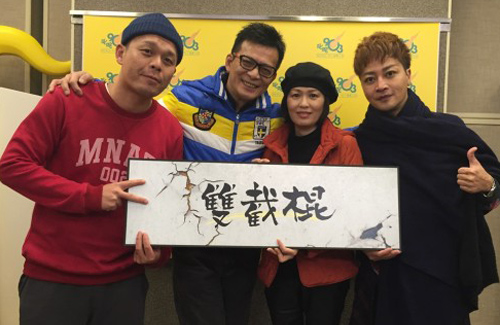 At first, Kit Wah believed she merely had the cold and was reluctant to visit the doctor. Kit Wah said, “We found out it was a big issue after the doctor examined the results of my blood test. He told me that a normal person’s blood platelets is between 150 to 200, but mine was only 10!”

When Felix first found out about his wife’s illness, he felt as if his world had fallen apart. He said, “We both stayed strong. I told myself I have to accept and face reality. I need to give my wife confidence and positive energy. I had to believe it was curable. I was calm. Even until now, I have not cried at all, nor have I ever lost hope.”

In contrast, Kit Wah was extremely nervous. Due to the concurrent issue of HKTV’s license being rejected, there were many negative news claiming that Felix was distancing himself from the broadcaster. Kit Wah clarified, “My husband and daughter had to take care of me and couldn’t attend Ricky Wong’s (王維基) functions.”

Having to deal with work and to take care of his wife, Felix truthfully admitted that the treatment process was exhausting and he suffered from mood swings. Felix said,“At the time, I really wanted to drop my work and spend all my time with my wife. But she insisted that I continue working because I can’t break promises. I felt that Heaven was testing my willpower. I can’t collapse.”

To avoid affecting their daughter, Adrian Wong’s (黃芷晴) mood and work, the couple initially hid the diagnosis from their daughter. Felix said, “After she came back and completed a show, we sat down for a family meeting. When she found out, she burst out crying and wanted to see her mother. When she saw Kit Wah, she was extremely worried and sad.”

Having mutually supported each other through 27 years of marriage, Felix is grateful that Kit Wah’s leukemia treatment has been successful. “I am very grateful for my wife’s strength to face this illness with courage. I feel honored to be her husband. Through the years, she has taken care of me, advised me to improve my shortcomings, and made me become a better person.”