What originally was meant to be TVB’s biggest hit for 2019 is now going to be aired on the graveyard slot inside.

Though not officially confirmed by TVB, the police procedural sequel Forensic Heroes IV <法證先鋒IV> is slated for a February 17th release, taking over the time slot currently occupied by Of Greed and Ants <黃金有罪>.

Due to its close proximity to the Lunar New Year, February is normally deemed as the “cannon fodder” month for TVB dramas due to lower viewership ratings.

Originally announced to be TVB’s anniversary drama of 2019, Forensic Heroes IV had to go through extensive reshoots due to a cheating scandal involving one of the show’s main stars, Jacqueline Wong (黃心穎), back in April 2019, which severely damaged her image. Roxanne Tong (湯洛雯) was hired to replace her in reshoots. A majority of the cast was called back to redo the scenes with Roxanne, including Selena Lee (李施嬅), who had already ended her TVB management contract at the time.

Dramas that usually air during TVB’s “graveyard slot” usually suffer from poorer ratings and little to no recognition at the year-end TVB Anniversary Awards. In the past ten years, only two dramas that were released in February managed to win recognitions: first was 2009’s E.U. <學警狙擊>, in which Michael Tse (謝天華) won Best Supporting Actor; the second was 2016’s Short End of the Stick <公公出宮>, with Raymond Cho (曹永廉) winning Best Supporting Actor.

Roxanne is upbeat and hyper, while Kenneth’s personality is mellow and sometimes considered to be boring. How do they get along as a couple? 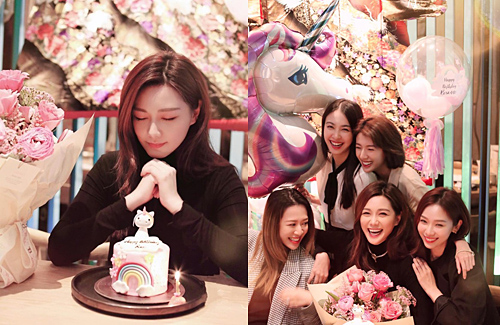 They’ve been together for one year–how did Kenneth Ma celebrate Roxanne Tong’s birthday?