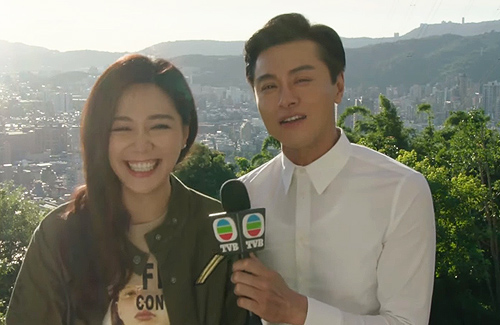 Roxanne Tong (湯洛雯) recently announced on Instagram that in a month she has finished shooting all of Jacqueline Wong’s (黃心穎) parts in Forensic Heroes IV <法證先鋒IV> and was very excited to see the finished product. She stated although the process was very challenging, someone once told her that success requires hard work.

TVB news show: The Scoop <東張西望> went to Taiwan to visit Roxanne and Raymond Wong (黃浩然) filming. With a new partner, Raymond seemed very energetic and indicated that in three days he had finished almost half of his scenes. He commented, “So far everything has been better than last time,” which seems to indicate that his experience with Roxanne has been better than with Jacqueline.

There were rumors that Roxanne was gaining weight and suffering from acne due to the pressure of having to take on this last minute job. But Raymond clarified that she is in great shape and now has the nickname “One Take Tong” and is able to finish her scenes without any outtakes.

In turn, Roxanne praised Raymond for his great personality, “He is a really nice person and was able to help me a lot! Due to the fact that I was added to the project later, there were a lot of things that were unclear to me. Raymond took the time to explain many backstories around the characters to help me immerse myself into my role.”

Roxanne indicated that this has been a very challenging experience for her, but she was able to learn a lot. Her most memorable experience was when she filmed with Nina Paw (鮑起靜) in Taiwan and there was a crying scene where she observed the buildup and emotion that went into the scene. “She was extremely professional and a great actress. I was able to quickly immerse myself into character due to this.”