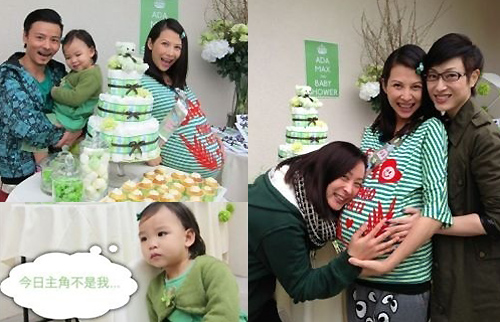 Ada Choi (蔡少芬) and husband, Max Zhang (張晉), will be second-time parents soon. Their friends organized a baby shower in anticipation of the couple’s baby’s arrival this spring. Currently 8 months pregnant, Ada was glowing with excitement and her belly has visibly grown in her last trimester.

The Zhangs, including Ada’s soon-to-be 2-year-old daughter Zoe, dressed in green to match the theme color of the baby shower. The 3-tier cake was also green and topped with a teddy bear while vanilla cupcakes were served for the guests. The park where the shower was held at was decorated with green flowers and white umbrellas.

Ada had hinted earlier that she is currently carrying another girl in her second pregnancy. Ada wrote on her Weibo, “Our good friends organized a baby shower to celebrate the arrival of the latest addition to the Zhang family. Thank God and my friends for their love and the wonderful weather! We enjoyed ourselves immensely!”

Good friends, Monica Chan (陳法蓉) and Kitty Lai (黎美嫻), were also at the shower. Afterward, Monica wrote on Weibo, “I would like to send my blessings to wish that the baby grows up quickly, healthily, and becomes a filial child. I also wanted to mention that Ada is an extremely beautiful pregnant lady!”

Aside from a new addition to her family, Ada will soon launch a baby apparel line, in which she and a friend had invested together. Although Ada has halted filming, she continued to make media appearances and attend mainland Chinese shows earlier this month.