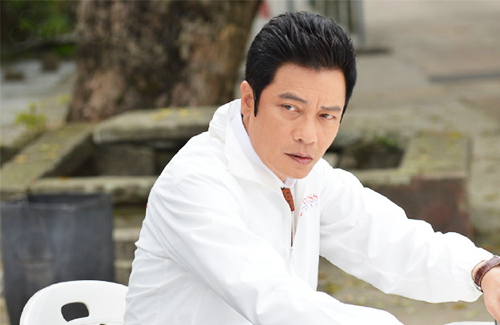 The TV King is back! Hong Kong’s first best actor in television, Gallen Lo (羅嘉良), will be back on the Hong Kong small screen next week, starring in the TVB business crime drama Provocateur <與諜同謀>. He’ll be leading a team of junior actors such as Fred Cheng (鄭俊弘) and Ali Lee (李佳芯), setting new fireworks for Hong Kong TV-goers.

It’s been eight years since Gallen last starred in a TVB drama. His last drama, 2009’s Born Rich <富貴門>, starred the TV King as a swindler who assumes the identity of a rich heir to amass the family’s vast fortune. To give the audience a nostalgic welcome, Gallen will be returning to the business world in Provocateur, going head-to-head with Fred Cheng in the political world of business.

Provocateur, produced by Wong Wai-sing (黃偉聲), stars Gallen as Cheuk Kwan-lam, a manipulative businessman who used sly tricks and ruthless methods to become the city’s richest and most powerful cosmetics mogul. Ironically, Cheuk is understanding and protective of his loyal assistant Rachel (portrayed by Ali Lee), and is a loving stepfather to his daughter Mani (portrayed by Jacqueline Wong 黃心穎), who he has been cultivating to become the heir of his business. Cheuk comes across a talented young man Ringo (portrayed by Fred Cheng), through whom he sees a younger version of himself. Cheuk grows fond of the young man, but he soon discovers that Ringo is actually part of a team of spies that steal trade secrets from large corporations for money. Cheuk starts to manipulate Ringo’s team from the inside, turning them against each other. Jonathan Cheung (張穎康), Jack Wu (胡諾言), Winki Lai (賴慰玲), and Roxanne Tong (湯洛雯) star as members of Ringo’s conspiring team.

According to Producer Wong, Gallen had requested to work with junior actors when he was discussing his contract for Provocateur. Gallen’s return to TVB was a huge benefit for the junior actors, especially for Fred.

“Fred’s been acting longer than he has been singing,” said Wong. “He was a graduate of the 2003 acting class and he’s always been a very hard worker. He also has a kung fu background, which was how he got his first major role in Find the Light <英雄‧刀‧少年> that year. Gallen has also praised Fred, calling him smart and hardworking. I always see them chat when they’re not filming.” Besides Fred, a large chunk of Gallen’s screentime is with Ali Lee, who plays Gallen’s personal assistant and Fred’s primary love interest. In the drama, Ali is six to seven years older than Fred, and is a single mother to a six-year-old daughter. Ali’s role was originally meant for Tavia Yeung (楊怡), who turned it down due to the expiring of her TVB contract.

Provocateur’s Mani is Jacqueline Wong’s first major role since 2015’s With or Without You <東波家事>. In the show, she plays Gallen’s ambitious stepdaughter who becomes jealous of Fred for his quick advancements within the company. Jacqueline is excited for the opportunity work with Gallen, and is also happy for the chance to play a strong female role.

Provocateur premieres on March 6, taking over the time-slot of Tiger Mom Blues <親親我好媽>.