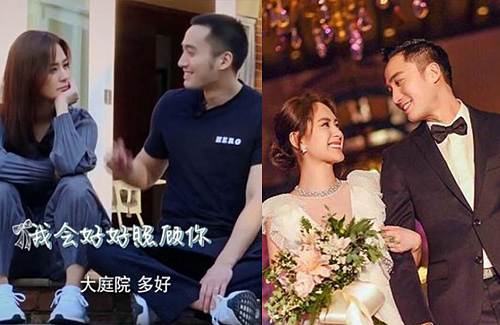 Newlyweds, Gillian Chung (鍾欣潼) and her Taiwanese doctor husband Michael Lai (賴弘國), are starring in new Mainland Chinese reality TV show, Parenting Class <爸媽學前班>. By joining the cast, Gillian and Michael may have intentions to have a baby very soon.

The new reality TV show features celebrity couples learning how to become good parents. Although, Gillian and her husband are the only couple without a child, she said they joined to take early child teaching lessons.

In the premiere episode, the couple showed immense love and happiness towards each other. Gillian revealed her opinion on Michael’s embarrassing romantic pursuit stories. He complimented all her features being very beautiful. In one scene which showed the long plane flight to England to film the show, Gillian felt extremely tired. Michael noticed her quietness and upset expression, so he tried to cheer her up through different ways. He hugged her, constantly showering her with compliments and often said light jokes around to lift her mood.

To lighten up the atmosphere during dinner time, Michael exposed that when he was pursuing her, he had once spent a large amount of money to specially order a lavish bunch of flowers, and sent it to Gillian’s home to celebrate QiXi Festival. He thought that she would be very touched by his actions. Instead, she sent him a message saying she doesn’t like flowers and lectured him on the amount of money he spent on the flowers, which she emphasized was impractical and a great waste of money.