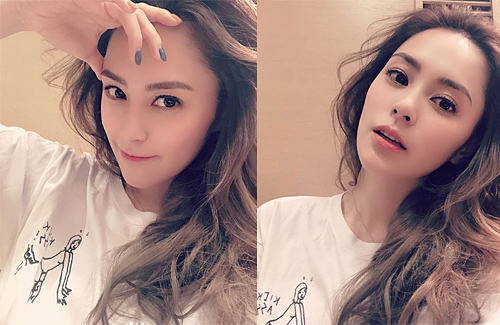 The social media-savvy star has been quick to tap on the massive potential of live streaming to gain fans and win brand partnerships.

Last year, Aaron Kwok (郭富城) did a massively successful crossover with Mainland influencer Tsang Wan (曾雲) in a live-streamed video selling shampoo, which saw 1.1 million views and over 4.5 million of sales. At that time, many wondered why Aaron, a megastar had to devalue himself by appearing in the online video. Fast forward to today, it has become a trend for celebrities to work with brands to promote their products using online platforms, especially with Covid-19 which led to many celebrities’ work commitments being pulled.

Under EEG Entertainment Group, Gillian Chung (鍾欣潼) seemed to have escaped the negative impact of the coronavirus, as her online revenue saw an upward growth with a seven-digit figure earned, prompting many celebrities to scrutinize her profitable methods.

Active on popular social media platforms for years, Gillian has established a firm footing as seen from her fan numbers. With 24 million Weibo fans, Gillian became a favorite among brands who are keen to reach their customers online. Active in live streaming recently, she had once received over a 140 million gold coins in online currency, and in recent years made her presence felt on the popular social media platform Douyin.

Recently, it was reported that Gillian has jumped on the bandwagon of live streaming, sending virtual gifts to influencers and interacting with their fans. A way of accumulating her own fans, Gillian has been actively appearing on other influencers’ live streams. As part of social media etiquette, these influencers would also check in during the actress’s live streaming, bringing along their own fans and thus ramping up her viewership.

Many influencers and their fans would mutually gift each other digital “flowers” as a practice, with each virtual flower priced at 2 yuan, which can be converted into real cash at the end of each month. New fans would often pay an extra two yuan to purchase her songs as a gesture of support. Although such revenue had to be split evenly between the platform and the artiste, conscientious efforts would result in a considerable online income.

Looking at the first week of April alone, Gillian had received over 39,000 virtual flowers from fans, with earnings of nearly 80,000 yuan without the need to even step outside her home.

As head of EEG artiste management Mani Fok (霍汶希) puts it, “As society evolves, commercial modes of marketing are also changing especially during this time when few people head outdoors, driving consumers to go online. This mode of consumption will become mainstream. While many may see this market as merely a way of earning side income, it will become the main source of income for the entertainment industry in the future, as live streaming becomes a solid channel for singing and performing. Gillian has been fast to grasp the workings of this platform, as she explores a lot and applies what she has learned. I really encourage all artistes to develop their own social channels.”