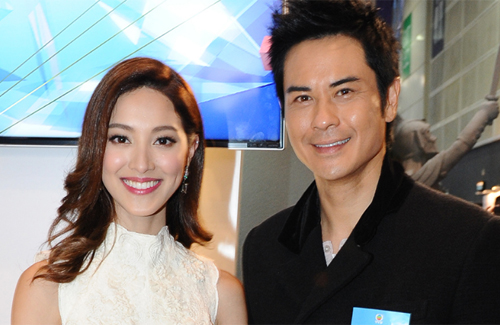 Attracting over dozens of fans while attending an event for a publisher, Grace Chan (陳凱琳) shared her upcoming plans for the Lunar New Year. With the holiday only two weeks away, families are busily planning festivities for the celebration. Although Grace grew up in Vancouver, she follows the traditions of having a Lunar New Year Eve’s dinner.

Revealing that her boyfriend, Kevin Cheng (鄭嘉穎), will be busy during the day due to a work event, Grace already made plans to have an early joint celebration between her family and Kevin’s family.

When asked if this meant the families will be getting together to discuss wedding plans, Grace laughed, “No, this is just two families having dinner together. This is fairly common overseas. It’s important that everyone’s happy and that we’re together during the Lunar New Year Eve’s dinner.”

Becoming good friends with Stephanie Ho (何雁詩) and Jeannie Chan (陳瀅) after working together on Raising the Bar <四個女仔三個 BAR>, Grace was surprised to hear about Stephanie’s financial hardships when she first entered the industry.

Denying that she helped Stephanie financially during the early stages of her career, Grace said, “I didn’t know about her lack of income. We know that we need to borrow clothes for work, When I have a good clothing sponsor, I would introduce friends to them. It’s good to share.”

Although she was unaware of Stephanie’s financial issues previously, Grace praised the actress. Grace expressed, “I never sensed anything – she had a great attitude and she’s very positive. Now that she just released an album, I’m happy to see her dreams come true!”