Grace Chan is a Wild Girl in “Brother’s Keeper 2” 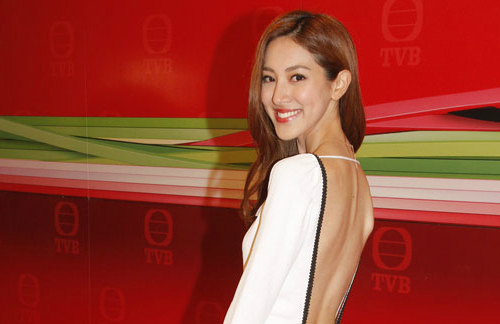 TVB rookie actress Grace Chan (陳凱琳) attended the costume fitting for Brother’s Keeper 2 <巨輪II> in a sexy white dress that fully revealed her back. She is excited for her upcoming role, in which she portrays a character with a wild personality and will be involved in a romantic relationship with Edwin Siu (蕭正楠).

In regards to her outfit of the day, Grace laughed and commented, “It’s sexy in a healthy way.” When asked if she needs to let her boyfriend Kevin Cheng (鄭嘉穎) have a look first, she exclaimed, “I trust the producer! He has seen it himself and said it looks good. I’m okay with it too.” Grace excitedly added that the cast will shoot some outdoor scenes in Okinawa, Japan, and her other colleagues have been very envious of this opportunity.

Despite being involved in a romantic relationship with Edwin’s character, Grace shared she will have more playful scenes with him rather than intimate. When asked if Kevin plans to fly to Okinawa to visit her, Grace expressed, “I don’t think so. He has work too!”

Kristal Tin (田蕊妮), who also attended the drama’s costume fitting, revealed that her character from the first installment has married Louis Yuen (阮兆祥) and is business partners with Edwin. Speaking of whether she has confidence in being crowned TV Queen for the second time with the same character, she jokingly expressed, “Now Grace Chan is the real ‘TV Queen!’ (referring to Grace’s revealed back in Cantonese). I can’t keep my eyes off her back!”

There does seem to be some pressure involved in portraying the same character. Kristal admitted she had a tough time falling asleep from studying the script. She revealed, “A lot of things happen in each episode. It’s very busy! I have to handle many things at once.” However Kristal will try her best to perform well in the sequel.