Grace Chan: “My Grandmother is Very Satisfied with Kevin Cheng” 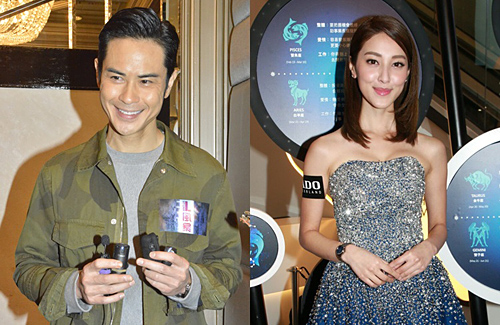 In a stable three-year relationship, Grace Chan (陳凱琳) and Kevin Cheng (鄭嘉穎) are often speculated to be planning their wedding soon. Well accepted by Kevin’s family, Grace revealed that his maternal grandmother has a very good impression of Kevin.

“When grandma saw Kevin face-to-face, she was very excited as she has seen him in many television dramas before. She said he is very handsome. Kevin is very well-mannered and knows how to take care of the elderly.” Grace praised Kevin and gave him 100 points for being a good boyfriend.

As March 14 is White Day, Grace was asked how she will be celebrating the romantic holiday. “We didn’t exchange gifts on Valentine’s Day. We will normally buy things for each other when we go out and see something nice. This time, I can gift him a watch. Since he is a Leo, the watch can have some gemstones.”

Visiting Grace’s married friends, Anjaylia Chan (陳嘉寶) and Winki Lai (賴慰玲), over the Lunar New Year holiday, Kevin was photographed happily cuddling Winki’s infant son. Anjaylia and Winki even gave out red packets to the unmarried Kevin, although he is older than them by two decades. When fans saw photos of the gathering, they urged Kevin and Grace to quickly tie the knot and close the gap with their married friends.

At a promotional appearance today, Grace also received a divination that she will have an auspicious event ahead this year. When teased whether this means her marriage with Kevin, Grace said, “I’m not too clear about divination. The host said that the auspicious event may encompass many areas, so it may not be what is on everyone’s mind.” Grace added that receiving a fortune telling can help her be aware of situations ahead of time, allowing her to make a positive spin on them.

21 comments to Grace Chan: “My Grandmother is Very Satisfied with Kevin Cheng”