Grace Chan Talks About Her Pregnancy 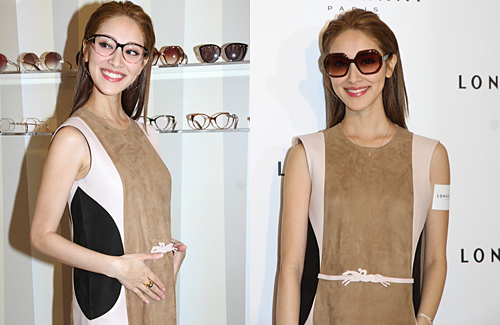 Last month, Grace Chan (陳凱琳) and Kevin Cheung (鄭嘉穎) shared the news that they are expecting and many became curious of the baby’s gender. Yesterday, Grace appeared at a eyewear promotional function in which she shared her thoughts on becoming a mother.

She said, “Today I saw a picture of a baby staring at its own stomach on Instagram and now I know what that feels like. I think pregnancy is so magical because I have been surrounded by many friends who are heavily pregnant including my aunt who had twins, and now, I finally understand the feeling!”

Earlier when Kevin was interviewed, he dodged the press’s questions over the baby’s gender and said Grace would make the revelation. She said, “To be honest, we said we would be doing this together, but he had to go to Malaysia for work. So we decided to reveal the gender when he returns at a gathering with our friends. We really respect our friends so we want them to know first instead of finding out through the media.” Grace said after they tell their friends, they will likely make the public announcement.

In terms of how pregnancy has affected her, Grace admitted she really loves desserts and had to change her diet to take care of her baby. She has also been receiving a lot of baby clothes, new and old, from friends who are very excited for her.

With Kevin out of town, Grace has not been worried about being alone because they both know that she has a lot of people to tend to her. She said, “Yes, he is fine with me working! He calls constantly to check up on me. He is very sweet indeed!”