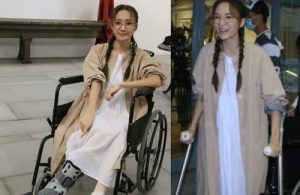 Although Grace Wong (王君馨) tore her ligament while filming the last shot of Super Emissary <超能使者> about two weeks ago, she is already back to work. Currently filming the upcoming TVB drama, tentatively titled No Problems in My Family <我家無難事>, with Mat Yeung (楊明) , Grace showed up at the film location in crutches and a wheelchair.

Hence, the staff and crew have thoughtfully arranged a double for her. She said, “I have already been hurt for a little more than two weeks now. I am starting to walk again, but I can’t walk for long. The bruise was already fading but because we have to finish filming at this location within these four days, standing for 10 hours every day caused me to bruise again. I hope I can walk again in two weeks.”

Originally, Grace was supposed to film the music video for her second song, but she had to push it back to November, given her injury. 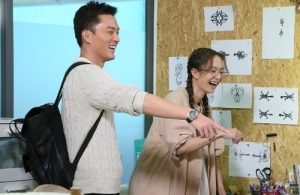 Aside from Grace’s dedication to filming while injured, many were shocked by how skinny she had gotten. Dressed stylishly with braids, Grace showed off her slim appearance. She said, “Everyone said I got skinner, but I already gained 10 pounds from eating a lot during the Mid-Autumn Festival.” When asked why her head looks smaller too, she said, “Probably because Mat’s head is big, so mine looks smaller.”

In the drama, Grace’s character knows Western embroidery and develops a relationship with Mat. Since Grace grew up in New York, she was asked if she ever learned how to knit. She said, “No, but I know how to sew. I did learn how to do embroidery for this role for three hours. People usually take 10 classes for three hours each. I took the accelerated version, and now I have developed an interest in it.”