TVB actor Gregory Lee (李泳豪) has come to the realization that he shouldn’t dwell upon the past and will only find happiness by moving on with life. In a recent interview, Gregory shares his experience in being stuck in an emotional rut during the lowest point of his life and had struggled in facing and overcoming his hardships.

Besides being known as the son of TVB veteran Lee Ka Ding (李家鼎), Gregory is also the ex-boyfriend of Shirley Yeung (楊思琦). With the actress confirming her marriage and second pregnancy, Gregory was asked to comment by reporters, but he has no intentions in creating drama. It has been eight years since the pair had broken up after Shirley got pregnant with her first child, and Gregory had already put behind the painful past. He diverted his energy towards managing his Japanese restaurant, which opened earlier this year.

As for his own love life, he expressed feeling envious of his brother’s happy marriage. His father always presses him to get married, but the 39-year-old actor hopes to find someone who is mature and understands him. 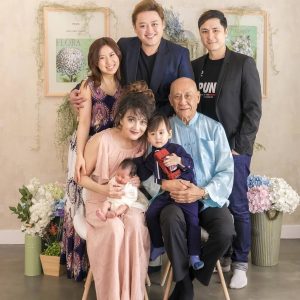 With his parents being both actors, Gregory and his twin brother Augustine Lee (李泳漢) naturally entered the entertainment industry and became child actors at the age of five. Gregory was a popular child star then, as his performance in Looking Back In Anger <義不容情> earned many praises from viewers. However, his popularity faded as he grew older, and a lack of notable works led to a subsequent lackluster acting career.

In addition, failed opportunities eventually drove Gregory to suffer a long period of sadness between 2003 to 2011. He had received a quality script and good production, but the film was taken down from the cinema due to conflicts between the CEOs of the two production companies. He also experienced another situation where the film was not shown in cinemas and only released on DVD.

During those times, Gregory questioned himself, “Why did I work so hard to film something, when it’s not going to be released?” The actor eventually realized these situations are common in the industry and emphasized that luck also plays a role in success. He asserts working hard as an actor is what he needs to do, but  the outcome will always be unpredictable.

Gregory is currently playing a café worker in Come Home Love: Lo and Behold <愛·回家之開心速遞>. Although it is a small role, he connects with the character a lot and is happy filming for the sitcom.