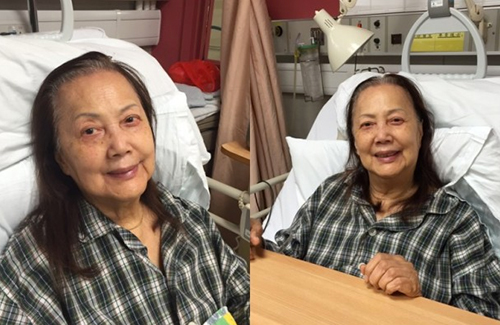 TVB veteran actress Ha Ping (夏萍), also known as Apple, was taken to a hospital after falling in her home on Saturday morning. But the 78-year-old is still very energetic, and assured the press that she is fine, expressing that she should be able to attend a TVB event on November 9. Joking with the doctors and nurses, Apple professed, “I’m already the best!”

After slipping and falling in her home on Saturday morning, Apple struggled in her home for over ten hours before a TVB manager called her to extend greetings. Upon knowing that she fell and is unable to move, the manager immediately contacted actor Leung Kin Ping (梁建平), the student of Apple’s husband, who told Apple to dial 999. Apple was immediately taken to a local hospital.

According to the results from her full body scans, Apple has not broken any bones in her body. However, Apple’s tailbone area is swollen, and she is currently seeing a physical therapist.

Leung Kin Ping said, “She still has to lie on a bed, so I am still quite worried.” How is Apple’s health? “Going through the common health concerns that the elderly have. She is a little diabetic. She doesn’t even know how she fell.”

Although Leung Kin Ping does not live with Apple, they contact each other everyday. Asking if he would be hiring a social worker or a home care nurse to take care of Apple, Leung Kin Ping said, “I’ll talk to her about it. It really depends on what she wants.”

Leung Kin Ping said Apple does have children, but he rarely hears her talk about them. “She doesn’t contact her family very much. Hopefully they’ll know about what happened to her through the news.”

Apple’s godson Gordon Lam (林家棟) is extremely worried about Apple. He said, “She lives at home alone. I once suggested her to live in a nursing home, but I would feel much better if we could hire someone to take care of her.”