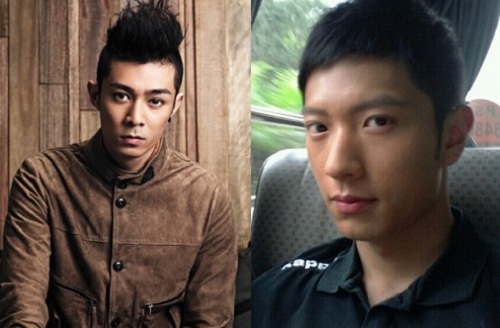 The scandalous court case involving male actors who took nude photos for 62-year-old wealthy businessman, Lau Ding Sing (劉定成), aroused curiosity as to which actors may have sacrificed their bodies for money and fame. It was rumored that Mr. Lau’s private photo collection included partially or fully nude photos of 35 male actors and Hong Kong police officers. Hot-bodied Him Law (羅仲謙) was widely reported to have disrobed for Mr. Lau, a rumor which Him Law’s management company has denied in a press statement.

The 62-year-old defendant, Lau Ding Sing, possessed immense wealth. His sister was the daughter-in-law of Macau gambling tycoon, Fu Lo Yung (傅老榕). After his university graduation, Mr. Lau studied fashion design in Japan and Europe. Twenty years ago, Mr. Lau returned to live in Hong Kong, relying on the wealth of his family to afford his expenses. Mr. Lau possessed a 1,000 square feet apartment in the Happy Valley district and 4 other residences in the Repluse Bay area.

In an interview with Apple Daily  in October 2011 , Mr. Lau admitted that he was gay. He said that male actors agreed to take nude photos for him because they were greedy for money. Mr. Lau said, “I stated my terms clearly. If they need my help, they have to show a bit of sincerity, by revealing their fully nude bodies! One is willing to buy; one is willing to sell! They are all adults; they allowed me to take the photos for money. Everyone in the entertainment industry is greedy for money and fame!”

Mr. Lau’s statement revealed that he did not feel that he took advantage of the subjects in his nude photo collection. However, wealthy men such as Mr. Lau, who believed that money can purchase the enjoyment of beautiful bodies, were often regarded as predators taking advantage of others in less favorable financial positions.

Him Law Clears Own Name

Since Him Law often displayed his naked muscular torso for photo shoots, film and television projects, he was quickly linked as one of Mr. Lau’s nude photo subjects. On May 16th, Him Law’s management company issued a press statement indicating that he never took fully nude photos in any paid or unpaid offers. Him did not participate in any unethical activities. The company reserved the right to pursue legal action over any unfounded claims.

Despite being linked to the scandalous nude photo case that Him Law wished to extricate himself from, TVB artists such as Michael Tse (謝天華) and Chin Ka Lok (錢嘉樂) continued to joke about the matter. Michael said, “I’m already too old! I will leave the opportunity to the young ones!” Michael then pointed at Him Law, who happened to be standing next to him at the time of the interview.

Chin Ka Lok commented on the nude photo case, “I’m so fat; of course I’m not part of it!” Asked what he thought of male actors who took nude photos, China Ka Lok said, “Hm! I will have to ask Him Law about it later! It doesn’t matter! There are different needs!”

Handsome actors appeared to be the target of indecent proposals, a fact that Mr. Hong Kong winner, Matthew Ko (高鈞賢) was well aware of. Matthew said, “I admit that I often attract the attention of [gay men]. I know that they like my type. There have been men who have flirted with me. They will ask me out by offering work projects, but I ask my manager to accompany me each time.”

Matthew erased any possibility that he had taken nude photos for money. “Otherwise, I would be driving a Ferrari instead of a Honda! I will not be living in Tseung Kwan O!”

Pakho Chau: “A Man Tried to Kiss Me!”

Aside from making millions of fan girls scream, handsome Pakho Chau (周柏豪) apparently tempted men to kiss him as well. When Pakho was working as a model, he was taken advantage of. Pakho said, “A gay man had rushed over to kiss my lips! I moved aside, so he was only able to kiss the corner of my mouth. He said he will help me change my clothes, while touching my butt! So I refused his help!”

Pakho cleared any misconceptions that he was discriminatory towards gay men. Pakho said that he felt his body was taken advantage of, given the circumstances at the time.

TVB actor, Cheung Wing Hong (張頴康), who had filmed The Mysteries of Love <談情說案>, revealed that he had filmed indecent photos in the past. He put on a mesh shirt and as his pants were very tight, the photographer asked him to remove his underwear.

Stanley Cheung (張景淳), of When Heaven Burns <天與地> fame, professed that he was caught in an uncomfortable photo session in the past. “I was wearing my own clothes and posed in a normal way. I did not reveal any nudity and did not have bodily contact with the person. However, he looked at me in an odd way.”

Since the photographer did not use a professional-grade camera, and only an automatic point-and-shoot model, Stanley acted upon his personal doubts and left the photo shoot.

Both Benjamin Yuen (袁偉豪) and Kenny Wong (黃德斌) admitted that they posed as nude models for art class students. They denied that they had stripped for money under indecent conditions.

Benjamin Yuen said, “At the time, I had not entered TVB yet. I will not pose for nude photos,” but he was apparently comfortable in modeling nude for an art class.

Kenny Wong said that he posed as a nude model for an overseas artist several years ago. “Before starting, I wrapped a towel around myself. When it was time for the painting to start, the perspective was only from the side and not full frontal nudity.” Kenny said that he has never been solicited to pose in indecent photographs, nor has he been inappropriately touched.

Jayne: I didn’t realize that Benjamin Yuen and Kenny Wong had worked as nude models for artists in the past. Benjamin did not elaborate on the details of his modeling session, so not sure if it was full or only partial nudity. Such activities supplemented their income in their early careers. I know Benjamin was a struggling actor for years until he won Mr. Hong Kong.

The recent news that handsome actors are also heavily targeted for indecent proposals put things into place. I found Matthew Ko’s response to be quite straightforward, in stating that he has often been invited to “jobs” that perhaps had an ulterior motive.

I also believe that the Mr. Hong Kong competition unwittingly made many participants an object of such indecent offers, since many muscular bodies were on display.