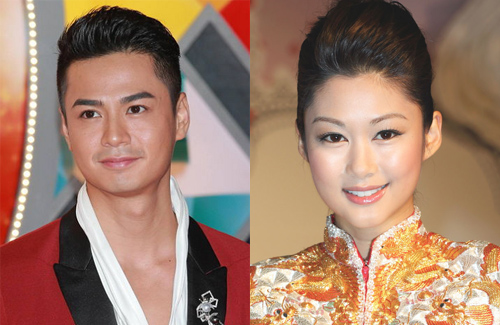 Is Tavia Yeung (楊怡) and Him Law’s (羅仲謙) relationship in trouble?

A recent tabloid report claimed that Him is planning to dump his 33-year-old girlfriend, Tavia, for The Hippocratic Crush 2 <On Call 36小時II> costar Eliza Sam (岑麗香), who is the same age as the 28-year-old Him. The reports then went on to claim that Tavia, who is also starring in The Hippocratic Crush 2, was extremely jealous of Him’s close relationship with Eliza and constantly visited Him on set to “guard” him. It was also said that Him and Eliza “immediately acted unfamiliar with each other” when Tavia appeared, and that Eliza “avoided to look at Tavia in the eye.”
As expected, rumors of Him cheating on Tavia with Eliza turned out to be fabricated. Yesterday, the cast of The Hippocratic Crush 2 – including Tavia, Him, Kenneth Ma (馬國明), and others, turned up at Tai Hang, Causeway Bay to shoot a Traditional Chinese wedding scene between Yat Kin Tau (Kenneth) and Yu Jai (Tavia). Him, who portrays the onscreen couple’s good friend Onion, was their groomsman.
Tavia did not seem at all perturbed by Him’s rumors with Eliza, and she happily agreed to pose with Him for press photos.
Asked if her romance with Him was on the rocks, Tavia exclaimed, “What nonsense! I don’t understand why the tabloids had to write it like that!” Tavia insisted that she and Eliza were good friends as they share the same sense of humor.
“We are happy together,” said Tavia when she was asked if she trusted her boyfriend. “He is deserving of my trust, and also Eliza. Since they say Him is interested in Eliza, I must say that I am too!”
“Thanks for all the concerns!” said Him when he was interviewed on the set of The Hippocratic Crush 2. “The reports are not true, but I expected something like this would happen. It has not affected my work.”
In regards to the rumors of Tavia “guarding” Him on set, he clarified, “That day there was another press release that contradicted that tabloid magazine’s claims. Tavia was there that day because she had a scene to film.” Him commented that Tavia is a “generous girl” and insisted that the tabloid reports will not affect his working relationship with Eliza. Him believes that his rumors with Eliza will die down soon, saying, “I rarely go out unless I am working, so this is the only time when the paparazzi can snap pictures of me. Eliza and I will be a couple in the drama, but I will not have any intimate scenes with her.”
Eliza was not surprised when she heard about her rumors with Him. In a phone interview, Eliza said, “I’m used to these kind of rumors! I remember I had rumors with a bunch of my male costars when I filmed Sniper Standoff <神槍狙擊>. It was frightening at the time because I was unfamiliar with how the entertainment circle worked, but now I am used to it!”
Source: ihktv.com
This article is written by Addy for JayneStars.com.

39 comments to Him Law and Eliza Sam Deny Love Rumors