Him Law Assures Tavia Yeung’s Back Pain Is Not Severe 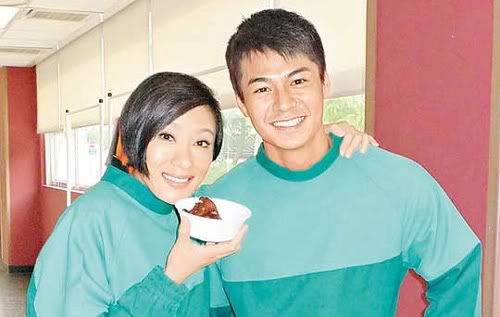 After completing Silver Spoon, Silver Shackles <名媛望族>, Tavia Yeung (楊怡) has immersed into new TVB drama, Justice Attack <法網狙擊>. Filming continuously without adequate rest, Tavia’s old back pain was ignited.  On May 22nd, she was spotted visiting an acupuncturist to seek immediate relief for her back pain.

Dressed in jeans and a striped sweater, Tavia drove her Mercedes Benz car to the office of Dr. Siu, a renown acupuncturist in the Sai Kung district. Due to Dr. Siu’s reputation and his reasonable fees, his office was full of waiting patients. Tavia waited for several hours before she was able to see Dr. Siu. She left the office at 2 PM.

Asked afterward why she was visiting the acupuncturist, Tavia said, “I am okay. I am here to get treatment for back pain!”

At TVB for 13 years, Tavia has reached the enviable position as one of the company’s top fadans. She was constantly in demand, juggling her filming time between Hong Kong and more recently, mainland China as well. Tavia’s hectic work schedule has compromised her health condition. Despite her current back pain, Tavia did not take any sick leave from TVB since she was currently filming Justice Attack.

Continues to Earn Money While in Pain

Despite her back pain, Tavia appeared at a promotional event with Michael Tse (謝天華) in a Foshan hotel on May 26th. Tavia and Michael attended a dinner organized by Agile Property, a frequent advertiser on TVB’s television networks. The duo sang songs before several hundred prospective property owners. Staying for only half an hour, Tavia earned $70,000 Yuan from the event!

Asked about the condition of her pain, Tavia replied, “No, my back has no problem. I am only getting acupuncture treatments to restore balance to my body.” Tavia’s statement appeared to conflict with her response in front of Dr. Siu’s office, where she admitted that she was suffering from back pain.

Him Law Assures Tavia Yeung’s Back Pain is Manageable

Appearing at an art exhibition yesterday, Him Law (羅仲謙) was asked about rumored girlfriend, Tavia Yeung’s back pain condition. Asked if he had expressed his concern to Tavia, Him replied, “If there is a back problem, I will ask how it is. The condition is not as severe as everyone thinks!”

Asked if Him has accompanied Tavia to the doctor, he said, “If I have time, I will see the doctor myself first!”

Embroiled in wealthy businessman, Lau Ding Sing’s (劉定成) photo scandal of muscular young actors, Him Law indicated that he had already responded to Mr. Lau’s case earlier and refused to comment further. Despite the recent onslaught of negative news, Him did not feel that he had bad luck.  “As an artist, there are both positive and negative news!”

Jayne: In Him’s response, he indicated that he knew of Tavia’s back pain condition, a sign that they have remained in touch recently. Are they close friends or dating partners?

Hope Tavia is feeling better, although the method of treatment (acupuncture) seems as if it is less excruciating than Raymond Lam’s earlier back pain (triggered by nerve condition). Raymond mentioned getting steriod injections to reduce pain, which sounded more painful.