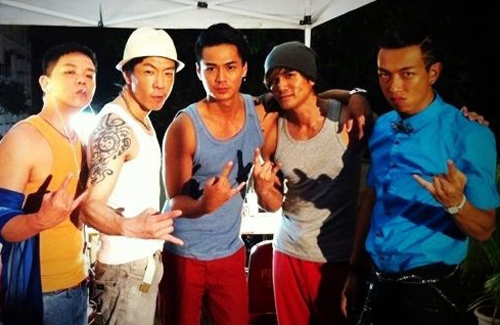 Wong Jing’s (王晶) up and coming Young and Dangerous: Reloaded <古惑仔之江湖新秩序> is wrapping production this month in Hong Kong. The crime film is a reboot of the Young and Dangerous film franchise of the late 1990s, which were also produced by Wong Jing.

A few days ago, the film’s main cast including Him Law (羅仲謙), Oscar Leung (梁烈唯), Jazz Lam (林子善), and Dominic Ho (何浩文) were filming on location at Tsz Wan Shan Estate Central Playground in Temple Hill. The scene being filmed centered on the four main characters discussing about their revenge plot.

Throughout the day, Him Law was seen acting very distant towards mainland actress, Kimmy Tong (童菲), who portrays Him’s love interest in the film. Him avoided to take a rest in the makeup trailer when Kimmy was present, and was willing to “feed the mosquitoes” by taking his breaks outside beside the forest.

When Him and Kimmy were filming a runaway scene in the beaches of Tai Kok Tsui in Mongkok, the two young actors rarely interacted, and only conversed with each other when they had to practice reading the script.

Him has always been very popular among his female costars due to his cheerful and flirtatious behavior. After working together on the set of The Hippocratic Crush <On Call 36小時> in 2011, rumors of Him and Tavia Yeung (楊怡) dating began to surface. Although Him and Tavia never directly admitted to the public that they were dating each other, their “car-shaking” incident last September made their relationship become an open secret. Is it possible that Him’s cold behavior towards Kimmy was because he did not want to anger Tavia?

Although Kimmy has very few scenes in Young and Dangerous: Reloaded, she will become a primary love interest for Him’s character in the sequel. Intimate scenes with Kimmy will be inevitable.

Him expressed, “I have gotten more cautious recently. At work, I will be careful when I am around women. I won’t be as glib-tongued… in short I will be myself properly and I will not think too much.”

Tavia, who is currently filming the TVB drama, A Great Way to Care 2 <仁心解碼II >, is always surrounded by her male costars. Asked whether Him would feel jealous, he did not respond.

12 comments to Him Law Avoids Kimmy Tong on “Young and Dangerous: Reloaded” Set