After welcoming their son’s arrival in December, Him Law (羅子溢) and Tavia Yeung (楊茜堯) have been staying at home to take care of their two children. Due to the pandemic, the couple decided that they will not be hosting a full moon celebration for their son, and instead will have a simple meal at home.

Excited to be a father again, Him was recently spotted at a toy store buying gifts for his children. Contemplating back and forth over what to buy, Him was seen thoroughly looking through the shelves. “I wanted to buy some toys for my son, but I didn’t want my daughter to be jealous. So, I am buying for both of them now,” the actor laughed.

When asked how his son is doing, Him responded that it is a lot smoother with a second baby as they already have parenting experience. “Since the gender is different, he requires a new method of rearing. For example, when I am changing my son’s diaper, I have to be careful that he doesn’t pee on me. I have to be prepared at all times!” 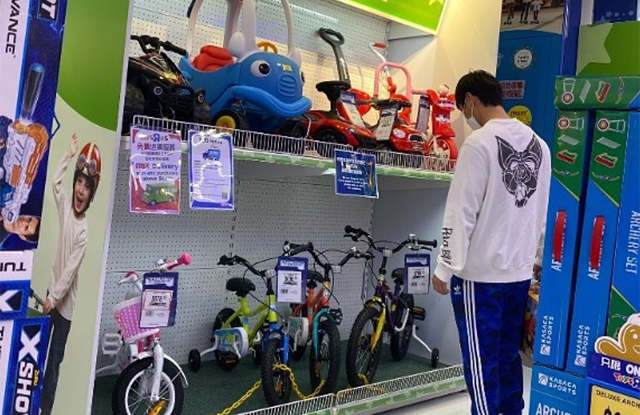 Although the couple has been taking a break from work to focus on their children, Him will be filming producer Lincoln Lam’s (林肯) new TVB drama After Marriage <婚後事> next. Him is excited to collaborate with Yoyo Chen (陳自瑤) again, as their last partnership was 12 years ago for L’Escargot <缺宅男女>.

Despite his relatively young age, Lincoln’s dramas Hong Kong Love Stories <香港愛情故事> and Freedom Memories <青春不要臉> have been praised their earnest and heartfelt stories.  Him said enthusiastically, “Lincoln’s work is very popular, because his content is so down-to-earth.”

This article is written Hailey for JayneStars.com.