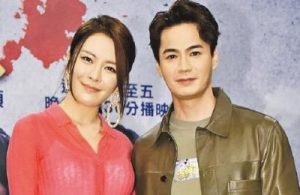 Him Law (羅子溢) and Tavia Yeung (楊茜堯) recently announced that they changed their Chinese names from Law Chung Him (羅仲謙) and Yeung Yi (楊怡) to Law Chi Yik and Yeung Sin Yiu, respectively. Many speculate that the switch is for good feng shui, while others believe that the couple is trying for a son. At a promotional event for The Witness <木棘証人>, Him finally revealed the reasoning behind their decision.

Him shared that they had changed it for some time now, but they only announced it publicly after completing all the necessary paperwork and procedures. He said the elders in their families were supportive of their decision, as long as it was good for the family. “We considered the number of strokes and the five elements when coming up with our new names, but my friend noticed that my name in Mandarin has the “Yi” sound, while my wife’s name in Mandarin has the “Him” sound.” Unknowingly, they adopted the sounds of each other’s original names in the Mandarin pronunciation of their new ones. 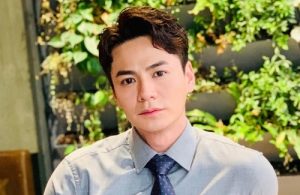 The actor said he and Tavia did not purposely seek out a fortune teller to change their names and added that it was “pure fate.” When asked if the switch is so the couple would have a better chance of having a son. Him responded, “That is just a superficial explanation, but not the truth. I will leave having a son up to fate.”

He candidly said he hopes his new name will bring good fortune to his career. While many are wondering if he could potentially snag the Best Actor title in the upcoming TVB Anniversary Awards, he expressed that it will depend on whether the timing, place, and relationships are all aligned in his favor. Meanwhile, it seems his change in luck career-wise is coming a lot faster than expected, given The Witness‘ good reviews.

As a matter of fact, the actor said his wife is obsessed with The Witness and laughs loudly every time she watches the show. He expressed that Tavia really misses being on-screen but doesn’t have time at the moment. Him said he wouldn’t mind being in a drama with his wife in the future, and he even joked that he would charge a lot to have his daughter, Hera, onboard as well. 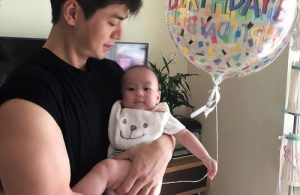 On the topic of Hera, Him recently posted a photo with his daughter, revealing his muscular arms. He laughed and shared that he is his daughter’s a human amusement park at home, often mimicking the drop zone ride, Ferris wheel, and pirate ship for her. He continued to say that he only has time to work out after his wife and daughter falls asleep. 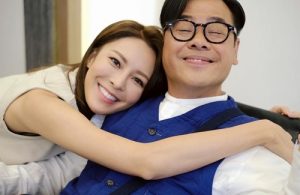 Aside from Him, Kelly and Willie Wai (韋家雄) also attended The Witness‘ promotional event. Given the drama’s great ratings, reporters asked Kelly if she hopes to win Best Actress. She expressed that she didn’t think too much about that, but she is happy that she got to collaborate with Him and Willie. She disclosed that Willie likes to make a lot of funny jokes during filming, as he did during the promotional event. Kelly confessed that she had many NGs because of his humor. However, she sometimes doesn’t understand his jokes when he quotes Stephen Chow‘s (周星馳) movies.

In the most recent episode, Kelly’s character bought sexy black lingerie for seduction. To accommodate this shot, she even brought her own black dress to wear over the lingerie for filming. Kelly believes that all girls like to buy nice undergarments as they do with nice shoes, but she has more shoes than undergarments. Still, she prefers to wear nude underwear at work, so it doesn’t show. As for her boyfriend’s preference, she expressed that he neither has a preference nor does he usually buy it for her. Kelly believes that purchasing undergarments is for her own enjoyment.