Chinese drama The Untamed < 陈情令> is one of the most highly watched dramas this summer. It had attracted great attention even before airing, with many fans of the popular novel Grandmaster of Demonic Cultivation <魔道祖师> eager to see which actors would be cast as their beloved characters Wei Wu Xian and Lan Wang Zi. 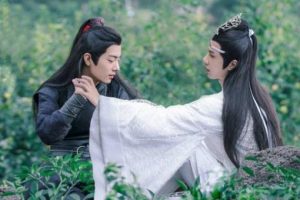 The chemistry between the two leads is highly valued by fans and producers with the story focusing heavily on the bromance. To live up to fans’ expectations, the casting process was careful to ensure the actors chosen to play the roles can successfully immerse viewers with their characters.

Producer Yang Xia (杨夏) revealed that a year before filming started, a friend had recommended him a new actor and gave him a photo of the actor dressed in historical costume. Not knowing the actor was Xiao Zhan (肖战), he was initially attracted by his captivating smile. Their first meeting went smoothly, and he was impressed with how passionate Xiao Zhan was with character Wei Wu Xian.

Fans also enjoyed Xiao Zhan’s performance as well, especially during the scene of him emitting a strong aura of hate with his red eyes and killing expression.

As for character Lan Wang Zi, Wang Yibo (王一博) was originally eliminated from the selection. The producer did not provide a reason, but it was likely due to the actor’s idol image that gave a very modern sense of feeling. However, after Wang Yibo was invited for an audition, Yang Xia said that his image was actually opposite of what they’ve thought, and immediately felt he was the character Lan Wang Zi as soon as he walked in the door.

Despite their different casting experiences, Xiao Zhan and Wang Yibo show great chemistry on and off-screen.