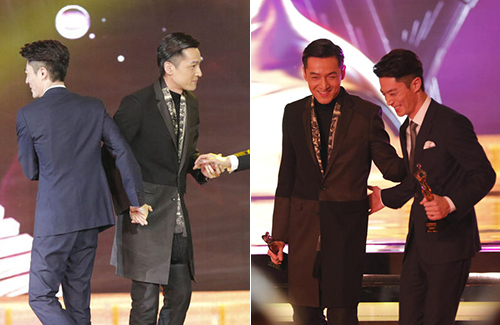 Hosted by the Shanghai Media Group, the first annual China Television Drama Quality Ceremony was held in Shanghai on March 8, 2016. The ceremony celebrates the achievements accomplished by television dramas that have brought about good word-of-mouth and viewership ratings in the past year.

Drama series such as The Legend of Miyue <芈月传>, Nirvana in Fire <琅琊榜>, and Tiger Mom <虎妈猫爸> were recognized with grand prizes. Other dramas, such as The Disguiser <伪装者>, My Sunshine <何以笙箫默>, and Good Time <大好时光> were also acknowledged with prestigious awards. However, what caught hold of the media’s attention was not the dramas, but Hu Ge (胡歌) and Wallace Huo (霍建华), who were both announced to have won the same award.

The Hu Ge and Wallace Huo coupling, or the “Hu Huo CP”, is one of the biggest ships in China. Their tight relationship and “bromance” has received extensive coverage on the media. Hu Ge and Wallace themselves have also acknowledge their extremely close relationship; Hu Ge had said before that Wallace is a very dear friend of his, and that it is hard for anyone to come across people who share the same morals and values as they do.

The Hu Huo shippers were ecstatic when the two best friends went on stage together to retrieve their award, The Most Marketable Artist Award. Fans screamed with glee when award presenters Tong Dawei (佟大为) and Cecilia Liu Shishi (刘诗诗) accidentally presented Hu Ge and Wallace with each other’s trophies, leading the popular couple to “exchange” their prizes on stage.

The MC asked Wallace to describe his relationship with Hu Ge. He quickly said, “He’s extremely thoughtful and professional.” Hu Ge then expressed, “I believe that everyone has their own aura. To be able to get together with someone—I mean to be able to get close with someone—must mean that our aura is compatible. Everyone likes to joke about the two of us, but it is really hard to come across someone who we can share our hearts and minds to.”

Chinese netizens also joined in the fun and reacted to Hu Ge and Wallace’s bromance on stage.

One netizen said, “Everyone say it after me: Get together, get together…! Hu Ge, Wallace Huo get together!” Another added, “Get married! I’ll be your surrogate!”

However, not all netizens reacted positively to the “Hu Huo CP.” One netizen said, “They’re both talented actors, yet they have to rely on gay rumors…” Another netizen remained skeptical, “Why is there always news whenever they’re in a photo together? Is it because they’re actually gay?”