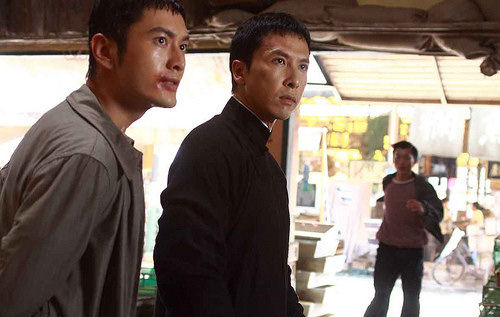 In Ip Man 2 <葉問 2>, Huang Xiao Ming will portray Donnie Yen Chi Dan’s eldest disciple, Huang Liang.  In the film, Xiao Ming had numerous fighting sequences. In one memorable scene, he and Donnie fought one hundred men. Xiao Ming and Donnie continued to fight their assailants, but the men surrounded the pair and kept attacking. Fortunately, Donnie and Xiao Ming were able to escape safely.

Since he was a young boy, Xiao Ming loved reading martial arts novels. It was always his dream to star in an action movie. Partnering with Donnie and Sammo Hung Kam Bo in Ip Man 2, Xiao Ming felt a large amount of pressure. One month prior to filming Ip Man 2, he started learning Wing Chun with a skilled martial artist and practiced vigorously opposite a wooden beam.

In an earlier interview, Donnie noted that although Xiao Ming did not have a martial arts background, Donnie admired his professionalism. In one scene, Xiao Ming did not meet the expectations of martial arts choreographer, Sammo Hung. Thus, Xiao Ming and Donnie had to film the combat scene many times. Although Xiao Ming’s arms started getting swollen and his face grew pale, he did not ask to stop to take a rest. This earned Donnie’s deepest respect.