Starring Kenneth Ma (馬國明), Mandy Wong (黃智雯), Hubert Wu (胡鴻鈞), and Moon Lau (劉佩玥), The Exorcist’s Meter <降魔的> was 2017’s surprise hit. At the 2019 TVB Sales Presentation held last month, TVB confirmed that it will be producing a sequel of the show, an announcement that was also confirmed by screenwriter Ruby Law (羅佩清), who said the sequel will be “more exciting.”

Hubert Wu leaked more details of the show in a TV interview aired this week. He told host Luisa Maria Leitao (黎芷珊) that the sequel will start filming in mid-January, and will follow what happened to Siu-ma’s childhood friend Ho Jai, who apparently died in a drowning incident when he was 8 years old. His adult self was then used by the rock spirit as its external body. 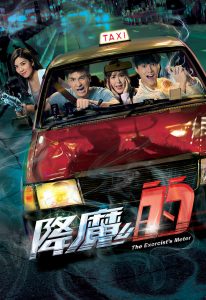 Careful to not spill too many details, Hubert was asked if his role in The Exorcist’s Meter 2.0 will be a villain. “I wouldn’t say a villain, but definitely a tragic character,” he said. “Everything I do is out of my control. Deep inside, I am not a bad person, it’s just that I’ve been through many unhappy things.” Would he be the main antagonist to Kenneth’s protagonist? “We will be against each other, but also help each other out a little bit.” He also added that he won’t be playing a couple with Moon Lau, sharing, “We’ll be enemies!”

Many fans voiced out their disappointment that Hubert will no longer reprise as the rock spirit, but he said, “His mission is over, and I do hope to be able to greet everyone with a brand new character.”