TVB announced that it will remake classic drama Return of the Cuckoo <十月初五的月光>, which originally starred Chilam Cheung (張智霖) and Charmaine Sheh (佘詩曼) two decades ago. The remake is confirmed to star Hubert Wu (胡鴻鈞) and Miss Hong Kong 2017 first runner up winner Regina Ho (何依婷) in the leading roles.

Other than her sweet appearance, Regina was a favorite during the pageant and has an affinity with the audience. Since becoming a TVB actress, Regina caught the eye of executive Virginia Lok (樂易玲), who singled the 25-year-old to promote due to her confidence and natural performance in Airport Strikers <機場特警>as Mat Yeung’s (楊明) materialistic girlfriend. Though her role was unlikeable, she stood out for two bold scenes in which she sat on Mat’s lap and washed a car while wearing a bikini.

A quick learner, obedient, and willing to take risks, Regina is promoted at a time when there is a shortage of female leads. A source said, “Many of TVB’s leading actresses have either left, or are married and having babies. TVB is very worried and is trying to promote younger actresses to fill the gaps. Originally, Crystal Fung (馮盈盈) was a prime candidate for promotion, but she was too busy focusing on her love life. TVB likes to promote employees who are obedient and have an affinity with the audience. Regina is a good fit with her sweet appearance and well-proportioned figure.” 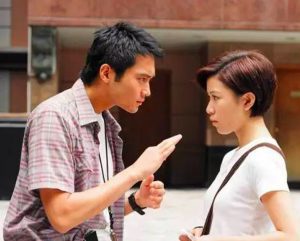 Return of the Cuckoo was TVB’s most popular romantic drama of the 2000s. Chilam’s role as a mute and his selfless love for Charmaine’s character touched many viewers. The drama was also memorable in other ways, as Charmaine delivered a breakthrough performance in her early career and cemented her status as leading lady, while the theme song sang by Chilam was also very popular.

A source disclosed, “It seems that the storyline is very simple, but there are many touching moments between the male and female lead characters. As far as I know, these scenes will be kept because this drama is at least 20 years old. Many of the younger audience may not have watched it before. TVB hopes to utilize a new method of filming, and use many fresh faces to repackage the drama.”

Starring in the remake, Hubert and Regina are very compatible although they are working together for the first time. On preparing for his role, Hubert said, “I took some sign language classes earlier–it’s pretty fun.” In her first leading role, Regina admits there is a lot of pressure, “I was very happy when I got the role. Thanks to the producer for taking a chance with me; I’ll do my best.”