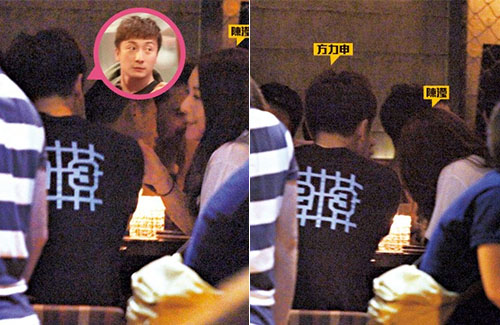 After breaking up with Stephy Tang (鄧麗欣) last year, Alex Fong (方力申) stayed a single man. Though he’s had his fair share of dating rumors with other celebrities since their split, they were either denied or ignored by all parties.

Recently, Hong Kong paparazzi spotted the 37-year-old actor with 27-year-old actress Jeannie Chan (陳瀅), who recently broke up with Stanley Ho’s (何鴻燊) son Arnaldo Ho (何猷亨). Paparazzi saw the pair meet up at a bar in Lan Kwai Fong, where they chatted for over two hours.

The paparazzi first spotted Jeannie arrive in Lan Kwai Fong with her “wingwoman”, Kandy Wong (糖妹), who introduced Jeannie to Alex. It’s been said that Alex and Jeannie have been seeing each other for at least three months.

Alex and Jeannie sat in a table with other friends that night, but they were mainly in each other’s company. They chose to sit on the spots that had their backs facing the entrance, in hopes to not attract attention. Paparazzi reported that Alex and Jeannie interacted like a fresh young couple, laughing and teasing each other. At one point, Jeannie playfully slapped Alex in the arm.

The pair left the bar separately. Jeannie was the first to leave with Kandy, and fifteen minutes later, Alex left the bar with a bespectacled male friend. On his way back, Alex was stopped by fans for photos.