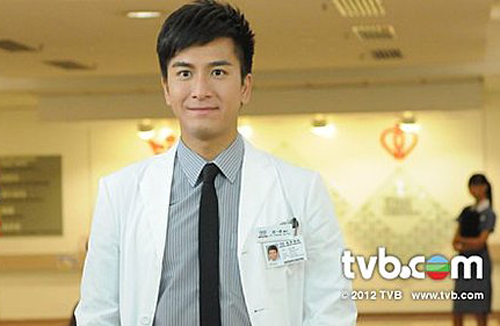 Kenneth Ma’s (馬國明) doctor role in The Hippocratic Crush  <On Call 36小時 > turned around his career and boosted his popularity immensely. With his good acting praised and prominent roles in TVB dramas this year, Kenneth may even be a dark horse to win the TV King award!

The Hippocratic Crush is the highest rated drama in the first half of this year. The drama’s ratings averaged 31 points and peaked at 39 points. Approximately 2.5 million viewers glued to their TVs to watch the drama on weekday nights.

In the recently broadcast Three Kingdoms RPG <回到三国>, Kenneth also had a breakthrough performance, playing the role of a comical slacker. The drama also delivered good results and its ratings averaged 30 points. Although it was the first time Kenneth had acted as a comedic character, his amusing and exaggerated expressions captivated  younger viewers. He is also very well-liked by young children!

TVB also plans to roll out a live voting system during the 2012 TVB Anniversary Awards, which gives Kenneth an advantage to win based on his popularity this year.

Kenneth is TVB’s Most Prominent Lead Actor This Year

Making a guest appearance in Tiger Cubs <飛虎>, Kenneth’s role as a violent robber continued to wow audiences, who praised him for his “ruthless killer” performance.

Branded as TVB’s “diamond bachelor” due to lack of scandalous rumors, Kenneth has attracted a large pool of female fans. As Kenneth’s popularity continues to rise, his chances of clinching the TV King Title also increases.

Kenneth Does Not Harbor Hope in Winning Award

As a dark horse in the upcoming TVB Anniversary Best Actor Award, Kenneth humbly replied, “There are many good actors this year. Dramas such as The Last Steep Aliment <天梯> and The Confidant <大太監>  have not launched yet. I dare not harbor any expectations. If I can be nominated in some categories, I am already very happy. I will leave it to the company.”

When asked if he hoped to win the award together with his frequent costar,Tavia Yeung (楊怡), Kenneth replied, “It does not necessarily have to be TV King or TV Queen. Even if they are Favorite Character Awards, we will be happy. I personally feel that Tavia’s acting has reached a certain standard. She only lacks an award. She is at the top position for the new generation of fadans. In my heart, she is considered one of the big sisters.”

Bosco Wong (黃宗澤) is also another strong contender in this year’s TVB Anniversary Awards. Bosco’s role as a Witness Protection Unit officer in Witness Security <護花危情> has earned him praises from the audiences. Many fans have even requested for a sequel. The drama is the highest rated drama year-to-date, averaging 31 points.

Other strong contenders for the TV King title include Kevin Cheng (鄭嘉穎) who reprised his role as “Law Ba” in Ghetto Justice 2 <怒火街頭 2>.

Moses Chan (陳豪) may also be a hot favorite, as his new drama The Last Steep Ailment <天梯> produced by Lee Tim Shing (李添勝) is set to broadcast soon.

Always a strong opponent to TVB sui sangs year after year, it is believed that Wayne Lai’s (黎耀祥)  King Maker <造王者> and The Confidant <大太監> will increase his chances for the TV King title as well.

44 comments to Is Kenneth Ma a Dark Horse to Clinch TV King Award?