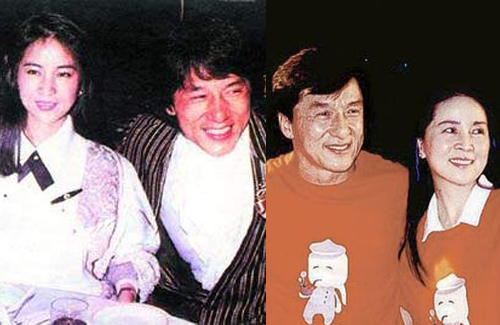 In Jackie Chan’s (成龍)  autobiography, Jackie Chan: Got Old Before Growing Up <成龍：還沒長大就老了>, he revealed his brief romance with the late Taiwanese singer Teresa Teng (鄧麗君), reluctance to start a family with his wife Joan Lin (林鳳嬌), and affair with Hong Kong actress Elaine Ng (吳綺莉).

Initially lacking trust in Joan, Jackie believed she had married him for his money. He confessed that if Joan was not pregnant with son Jaycee Chan (房祖名) at the time, he would not have married her. While Joan was pregnant, he continued to date other women, hoping “to pick the best girlfriend”. He ultimately chose Joan because she got along well with his close friends.

However, Jackie continued to distrust Joan and intentionally gave her a small allowance for her living expenses. He even considered divorcing her, and giving her no financial support afterward.

“I was very stupid,” Jackie admitted as Joan proved to be a virtuous woman throughout their marriage. When his extramarital affair with Elaine was exposed in 1999, Joan remained calm and forgave Jackie for his infidelity. Stating that Joan is the only love of his life, Jackie revealed that his relationship with Joan improved after Jaycee’s drug arrest in Beijing last year.

“I was an Annoying Youth”

Fame made Jackie arrogant during his younger years. He said he was an uneducated youth who suddenly earned $10 million HKD overnight. When he passed by a watch store, he immediately spent $500,000 HKD to buy luxury watches for his assistant. He said he did not even bother to use credit cards — “I would bring $1.5 million HKD in cash with me everyday. I drove a Porsche in the morning and a Benz at night. I was always drunk.”

When he was 40, Jackie thought about an early retirement. He wanted a “beautiful retirement,” and constantly pondered how he should make his retirement memorable and unforgettable. He even outrageously thought about “leaving” like Bruce Lee (李小龍), whose sudden and tragic death at the young age of 32 made him a legacy.

As he was filming the volcano scene in 2012’s CZ12 <十二生肖>, he once thought about jumping into the volcano and end his life with a bang. “But then I realized that I don’t want to die and I don’t want to retire,” said Jackie. “Maybe I should retire now, to get out of the spotlight and travel the world, but I need to remain committed. I am happy with my commitment.”

Already 61 years old, Jackie said his only regret was that he did not go to school. He said he often had trouble signing autographs when he was in China as he did not know how to write many of his fans’ names. “It’s really embarrassing!” he said.