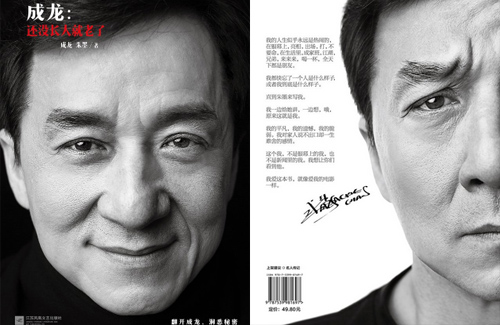 Turning 61 this year, Jackie has lived a life of adventure. From being one of the most recognized Chinese stars in the world to being criticized for his family views, Jackie divulged his happiest and darkest moments in the autobiography. He talked about the internal struggles he endured after his affair with actress Elaine Ng (吳綺莉) came to light, and how he felt when his son, Jaycee Chan (房祖名), was arrested for drugs last year.

Wife Was Silent Over Jackie’s Affair

“I committed a big mistake. I thought divorce was the answer,” said Jackie when recalling the time he had to call his wife, Joan Lin (林鳳嬌), to confess to her about his affair with Elaine. “It was a mistake that was not possible to fix. The media exploded, and I had to call her, but I didn’t know what to say. At that moment, I suddenly felt relaxed, because there was nothing for me to explain. All I needed to do was call her. If she interrogated me, I’ll suggest divorce, and then hang up. That was what I thought would happen.”

Instead Joan, whom Jackie described as the “love of his life,” stayed silent. “I asked her if she read the reports. She said yes. Then, there was silence.”

Jackie then went into detail about his high-profile relationship with the late Teresa Teng (鄧麗君). The legendary romance was short-lived — Jackie was short-tempered and Teresa was refined; Jackie ate fast while Teresa ate slow.

“At the end of the meal, I was stuffed, but Teresa was still eating. Usually people would spend two to three hours in a French restaurant. We took only half an hour.” When Jackie and Teresa walked out of the restaurant, Jackie turned to Teresa and said, “Never bring me to this restaurant again.”

When speaking about his only son Jaycee, Jackie shared that when his son was still a child, he used to tell him that he was not allowed to touch a particular cabinet. “From then on, whenever [Jaycee] would go to his room, he would always avoid that cabinet and take the long way to the room. I felt happy seeing that.”

Jackie and Jaycee once got into an argument, but instead of taking his anger out on his parents, he went to the “forbidden” cabinet and hit it several times. Jackie said he and Joan could not help but to laugh.