Gaining widespread recognition after joining JYP Entertainment’s K-pop boy group, Got7, Jackson Wang (王嘉爾) continues to enjoy immense popularity since going solo. Earlier this month, Jackson was invited to Thailand to open for the Manchester United vs. Liverpool soccer match. Upon arrival at the airport in Thailand, Jackson was greeted by a crowd of fans both inside and outside of the airport. Despite the early morning flight and onset of several projects and activities to attend to, Jackson smiled and waved and thanked his fans warmly.

In a circulating video of the event, Jackson was seen walking to the parking lot accompanied by his staff and bodyguards. With fans screaming enthusiastically at seeing their idol, Jackson motioned for his bodyguards to step aside and make room. Jackson then knelt on the ground and bowed his head for over 10 seconds, saying to his fans, “Thank you! Thank you! I love you guys!” 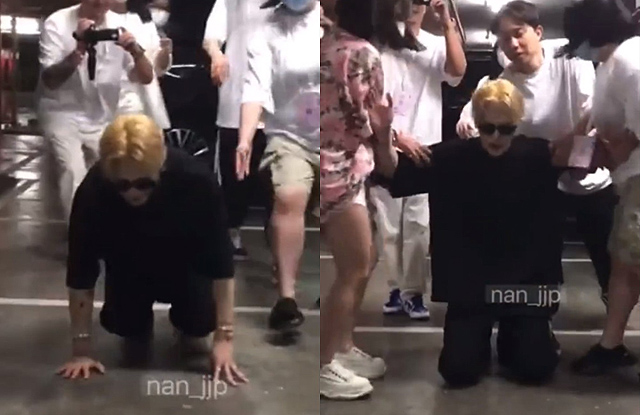 Jackson’s actions caused heated discussion and controversy. Some fans expressed aversion to his actions and lamented that he has not thanked Chinese fans with the same level of appreciation, while others supported Jackson for his respect and practice of local Thai customs.

“The fans waited a long time in the heavy wind and rain for him. Jackson used the highest form of local etiquette to thank his fans,” one netizen reasoned. Praising him for his sincerity, another pointed out, “I heard that the Thai fans knelt down to him first, so he returned their courtesy by local custom.”