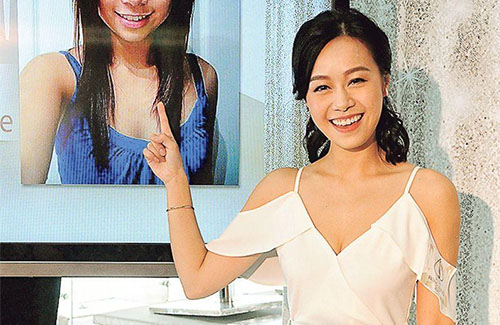 Earlier this week, Natalie Tong (唐詩詠) and Tony Hung (洪永城) dropped the sad (yet expected) news that they have split, ending their two-year relationship. While their breakup was met with sadness, many other fans vocalized their desire to see Natalie hooking up with Kenneth Ma (馬國明) for real.

Natalie and Kenneth have been close friends for many years, and their close friendship on and off screen often led to rumors. When Natalie was still dating Tony, there was gossip about Kenneth trying to get in between them. At the time, Kenneth and Tony happily played along with the rumor, telling everyone that they were love rivals.

This love triangle died down after Kenneth was revealed to have gone to dates with Jacqueline Wong (黃心穎), which was confirmed.

Attending an event yesterday, the Deep in the Realm of Conscience <宮心計2·深宮計> actress was approached by reporters to comment on the resurgence of “KenNat” shippers, all asking Kenneth to ask Natalie out.

“Why would I be jealous?” said Jacqueline. “If I am, then I am not a good woman. I do understand where the fans are coming from, but fiction and reality are two very different things.”

She then stressed that she and Kenneth aren’t exactly in a relationship, and she would not consider Kenneth her boyfriend yet.

While doing an interview yesterday, Natalie broke down into tears when she was prompted with questions in regards to her breakup with Tony, which is rumored to be due a third party.

Jacqueline said, “I read her interview, and my heart goes out to her. I’ve experienced a time when people would write negative things about me, too, so I understand what she’s feeling. She’ll recover from this fast. I know it.”