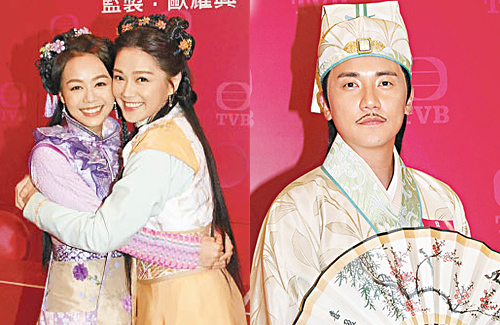 Promoted to first lead for the first time, Jacqueline Wong did not feel too much pressure. Maturing over the years, Jacqueline said she would have felt nervous if she was in this same position one or two years ago.

Celebrating her 29th birthday last week, Jacqueline’s career and love outlook seem to be taking a great leap. Photographed having dinner with Kenneth Ma (馬國明), the couple is now more open about their relationship. Asked if she received any special presents from her boyfriend, Jacqueline shook her head, “No, flowers and a ring are serious gifts; please think about them before giving.”

Starring as the playboy lead, Tony said he is not worried about how this will affect his celebrity image. He laughed, “Don’t be so judgmental and think that I’m this type of person – I’m actually quite the gentlemen in real life.” Trying different looks before settling on the final look, Tony said the producer ended up adding a mustache to his character to make him look more flirtatious.

Speculated to be pursuing ex-girlfriend Natalie Tong (唐詩詠) again, Tony was asked whether he had celebrated Natalie’s Best Actress win together. Tony smiled awkwardly, “I’ve congratulated her, but we haven’t had time to have dinner. She is very busy so it doesn’t really matter if we eat together or not – as long as she’s happy.”

When pointed out that many fans want Tony and Natalie to reconcile, Tony said, “I’ve read a lot of comments – but we’re friends and colleagues. We’ll keep this status for now.” Asked if they had any chance to get back together, Tony said, “I’m not really sure how I should answer you? I can only say that we’re good friends at the moment.”