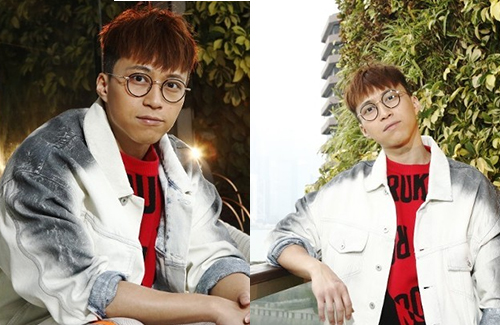 James Ng’s (吳業坤) 30th birthday also commemorates his 10th year in the entertainment industry. Known as Kwan Gor, the 30-year-old The Voice <超級巨星> star has released four albums and has starred in over 25 television dramas, all with varying degrees of success. But despite Kwan Gor’s popularity with the younger generation, his road to stardom hadn’t been steady at all.

Kwan Gor can recall two major downward slopes in his career—the first happened in his first five years of debut, when he lingered between acting and music and couldn’t find his footing in neither of the two. The second happened earlier this year, after he signed with a new record label.

But Kwan Gor won’t let his new career low slow him down. In hopes to fulfill his dream of debuting in the Japanese music industry, Kwan Gor is preparing his new “turf war” by dedicating his time to learning Japanese. “I’m planning on taking the Level 1 exam soon,” he said. “I was a huge fan of anime growing up. If I do end up [debuting] in Japan, my life would be so much easier if I actually spoke Japanese, which is why I’ve decided to learn it.”

Kwan Gor thanked his celebrity tutor, Lesley Chiang (姜麗文), for being supportive of his efforts. “She’s fluent in Japanese and she inspired me,” he said. “She would use strange techniques to train me. She will not hold back in gossiping about the person in front of her in Japanese.”

But when it comes to his dating life, Kwan Gor said he would rather look outside of his circle. “The entertainment industry has not stability,” he said. “One person can already bring on so much gossip. When two people are together, add an exponent to that number. Also, if you date someone from out of the circle, the world would become so much bigger.”

While Kwan Gor doesn’t feel it to be necessary to “go underground” in a relationship, he has reservations about publicizing them. “There’s just too many things that you don’t know will happen.”

Once nominated for Best New Performer at the Hong Kong Film Awards, Kwan Gor had considered pursuing a film career. He wants to take part in a small-time romance film, saying, “I need to go for what I’m best at! (You mean chase after girls?) I don’t mind be the one getting chased! It doesn’t have to be a dramatic film, just a relatable. I don’t want to have to play a villain or a character with terminal disease to break out. I still need a lot more experience.”

Pointing out that TVB is currently lacking male lead actors, Kwan Gor said he doesn’t think he is capable to reach that level yet. “Actors like Matthew Ho (何廣沛) and Owen Chueng (張振朗) are, in my opinion, the real rising stars,” he said. “I’m still lingering around, but I’m grateful for all of my roles. People know me as a singer, but they’ve just started to recognize me as an actor. I’m not in a hurry. I want to work on both fields. I don’t think I’ll be even able to handle it if I was given a big role when I first started.”

13 comments to James Ng Wants to Debut in Japan