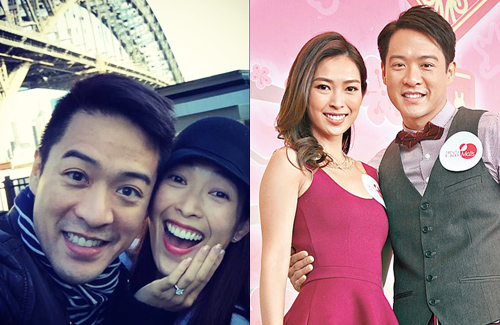 Since making their relationship public, TVB actor Jason Chan (陈智燊) and Miss Chinese International 2007, Sarah Song(宋熙年) have had to deal with constant speculation over their marriage plans. Jason often dodged the rumors by stating that he would need to save enough money for marriage first. Today, Jason announced that Sarah finally agreed to marry him.

On his social media account, Jason posted their photo and captioned it, “21.07.2015 Milsons Point, Sydney. She belongs to me.” In the selfie, the couple flashed their blissful smiles and Sarah also deliberately flashed the diamond engagement ring on her finger.

In response to the media’s queries, Jason confirmed that he successfully proposed to Sarah on 21 July and said, “Thank you so much. We’re so excited. We’ve actually been thinking of marriage for a while, but I was waiting for the perfect chance to propose to her as I wanted to surprise her. She was in Australia visiting her dad and as I was in the middle of filming, I didn’t appear to have the time to go with her.

Without her knowledge, I took two days’ leave from my producer and flew to where she was. I knew her itinerary so I waited outside this restaurant for more than an hour before I finally surprised her. She was so surprised and touched when she saw me!” Jason added that it was a very traditional proposal: he had a bouquet of flowers ready, knelt down and had Sarah’s parents witness the proposal.

Jason did not seek the help of Sarah’s parents for the proposal as he was worried about them unintentionally giving the surprise away. On whether he had cried during the proposal, Jason admitted, “I had originally prepared all these things I wanted to say but when the time came, I was crying so much I couldn’t say any of it.”

On when their wedding date would likely be, Jason said, “I really have no idea. We’re thinking of England, Australia and Hong Kong as possible locations, so it will also depend on where we hold the wedding. As we have many friends and colleagues in Hong Kong, we would like to share our joy with them here.”

Background to the Romance

Thirty-seven-year-old Jason and 29-year-old Sarah, first became close when they worked together as hosts for an entertainment news program on TVB. Since Jason grew up England and Sarah was originally from Australia, the couple immediately bonded due to their western upbringing.

Last year, Sarah finally admitted to the romance on her 29th birthday. Subsequently, the couple was often spotted holding hands in public, and Jason also frequently mentioned that Sarah is an ideal wife. Jason even stated that he hoped to marry Sarah within three years.

Despite his western background, Jason reportedly possesses traditional Chinese values and has vehemently denied the rumors that he and Sarah co-habited in Tseung Kwan O during their dating period. It is also known that Jason’s parents have a very positive impression of Sarah and strongly encouraged Jason to marry her. Jason has finally fulfilled the wishes of his parents and his own wedding dreams!