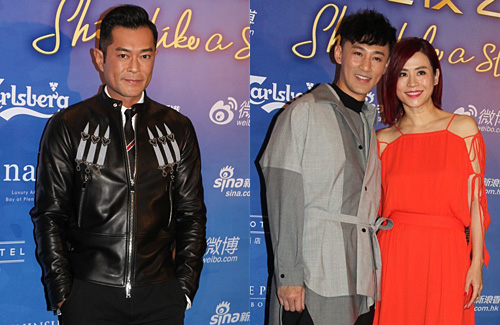 Good friends Jessica Hsuan (宣萱) and Louis Koo (古天樂) will be filming two movies together this year. Jessica laughed, “It’s been a long time since our last collaboration. I need to warm up first!”

Aside from reprising their roles in the upcoming film adaptation of A Step into the Past <尋秦記>, tentatively titled Back to the Past, Jessica confirmed that she would actually film another movie with Louis Koo first. This project would also feature Louis Cheung (張繼聰), whom Jessica admires for his versatile acting. Jessica said, “I’m very happy because I haven’t worked with Louis Cheung before.”

As Jessica and Raymond Lam (林峯) have both signed with Louis Koo’s manager, Ronnie, this will increase future collaborations among the three artistes. Raymond would also be reprising his character in Back to the Past, which would start filming at the end of the year. Raymond said, “I know Louis has been working on the script for years, but I still haven’t received the final script yet.”

Asked if he felt the cast has aged since the airing of A Step in the Past 17 years ago, Raymond replied,
“I think I’m better looking now. When filming the drama, I didn’t really know what I was doing. A Step Into the Past was my first ancient drama. Now more than a decade later, I’m more well-trained!”

When reporters told Louis Koo that Jessica would require some time to warm up as co-stars again, Louis said, “There’s no need for warm up. We know each other so well. We got along very well while filming A Step Into the Past, which took eight months to film.”

When it was noted that Jessica and Raymond’s appearances still look youthful after all these years, Louis replied, “No one can fight against time; people will only grow more mature. But it’s a different feeling. If you ask me to act the same character from more than ten years ago, I couldn’t do it!” Asked if his character Hong Siu Lung was too mischievous, Louis said, “When I portrayed his character, he wasn’t mischievous.”