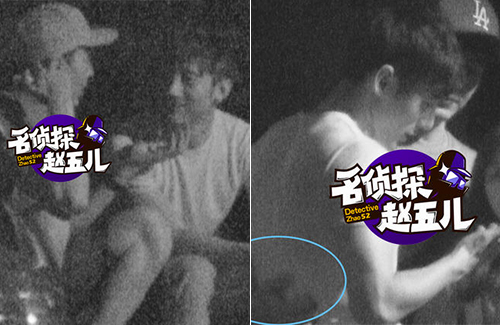 Taiwanese actor Joe Cheng (鄭元暢), best known for his starring role in the It Started With a Kiss <惡作劇之吻> series, has become a topic of interest among gossip circles.

The 34-year-old, who is currently in Mainland China shooting a new television drama with Wang Likun (王丽坤) and Xiong Naijin (熊乃瑾), was spotted acting intimately with a male friend while out eating dinner with the cast and crew.

According to the paparazzi who spotted the crew, Joe never left his male friend’s side while they chatted with their friends. When Xiong Naijin had to leave, Joe generously escorted her to her car. Wang Likun left soon after, and hid her face behind a mask.

After his two costars left, Joe and his male friend stayed around and continued chatting. The two interacted intimately—at one point, Joe snuggled up against his friend’s shoulder, hugged his arm, and brushed his chin. Joe held onto his friend’s waist tightly when another female friend was showing them something in her phone. When his friend’s ride came, Joe gave his friend a tight hug and held his hands.

Joe’s friend, which the Taiwanese media later reported to be called Ding Yi (丁一), is an actor-model. According to the source, Ding Yi is already married and has a child.

The intimate interaction between Joe and Ding Yi has led to speculation about Joe’s sexuality. However, his manager immediately denied the gay rumor, saying, “Impossible. Those are exaggerated reports. He has had many interviews in the past where he talked about his ideal woman.”