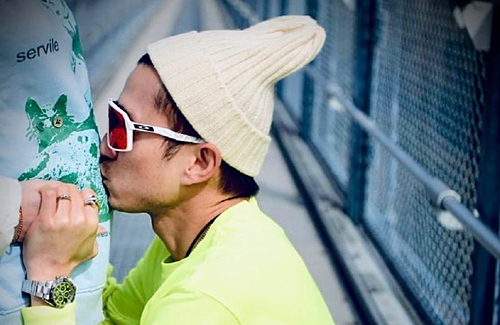 After tying the knot in late 2019, Joel Chan (陳山聰) and his wife, Apple Ho (何麗萍) soon announced that they were expecting a child. Recently, the father-to-be excitedly shared that the couple is expecting a baby boy! Apple is expected to give birth in the summer.

Due to the current pandemic, Apple has been staying home in order to ensure safety for herself and the baby. Fortunately, Apple does not mind staying at home, and the isolation has not affected her mood or health. Joel shared, “My wife has not experienced any morning sickness throughout this pregnancy thus far. Her physical features have not changed much either, other than her belly growing. She’s feeling quite content, because she is the queen of the house right now. I do whatever she says and will go out to buy all her daily necessities.”

On whether the couple has plans to try for a girl after their son is born, Joel expressed that he would like to take time to learn the steps of fatherhood with baby number one first. He added, “Fortunately, a lot of my friends, such as Shaun Tam (譚俊彥), Sharon Chan (陳敏之), Jack Wu (胡諾言), and Derek Kok (郭政鴻), have given me advice and introduced a lot of sponsors to me. My baby boy will have a lot of necessary items when he’s born!”

Known for having many close friends both in and out of the entertainment industry, Joel expressed that his baby boy already has three godfathers. They consist of Derek and two other friends. However, the couple has not selected a godmother yet.

3 comments to Joel Chan is Expecting a Baby Boy