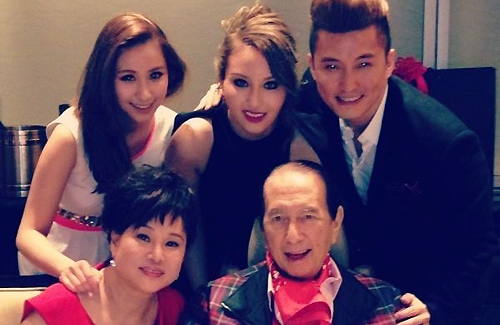 Despite speculations that they would not last, Joel Chan (陳山聰) and Florinda Ho (何超雲), daughter of casino tycoon, Stanley Ho (何鴻燊) have been dating for 2 years. Currently, Stanley’s third wife and Florinda’s biological mother, Chan Yuen Chun (陳婉珍), revealed that Stanley has been pestering the couple to get married.

Almost 2 years ago, Joel and and Florinda shocked the public when they announced that they were dating. This was partly due to the fact that Joel had been married when their love affair began. However, not only does it look like the couple’s relationship is steady as a rock, there may even be the not-so-distant sounds of wedding bells ringing, even though Florinda has denied that Joel has proposed to her in Portugal last August.

The ever-supportive boyfriend, Joel has taken an indefinite break from his work, allegedly angering TVB for choosing love over career. He has been accompanying Florinda on her travels abroad. In between work, the couple spent plenty of quality time together, dispelling frequent rumors that they were on the verge of a break-up.

Presently, Florinda’s mother disclosed that each time Stanley sees Florinda, he would pester his daughter to get married. Obviously, Stanley and his wife have already accepted Joel as his son-in-law. Chan Yuet Chun further revealed that they hope the young couple will stay with them after marriage.

Perhaps the wedding date may already be set. Two days ago, Joel was spotted at a Wan Chai café with a guy friend. Attired from head to toe in black, his hair was slicked back, looking cool and suave in the cold winter. Shortly after, he bumped into TVB colleagues, Florence Kwok (郭少芸) and Toby Leung (梁靖琪) who have just visited Bobby Au Yeung (歐陽震華) at the hospital. Observant reporters saw Florence shaking Joel’s hands. When asked if she was congratulating Joel on his marriage, Florence said, “We are colleagues and haven’t met for a long time. It’s the New Year so we just shake hands and wish each other well.”