TVB actor Joel Chan (陳山聰) has welcomed the arrival of his newborn son!

Sharing his first family photo of three on Instagram, the actor wrote, “The most beautiful image in my marathon of life. Thankful. Your daddy hopes you will grow into a man of positivity, good health, and happiness. 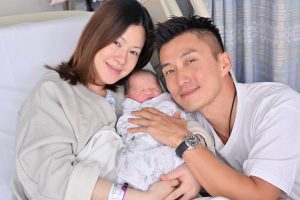 Joel shared to the media that his close friends, Pal Sinn (單立文) and his wife Paisley Wu (胡蓓蔚), named his son Jaco. Joel was in the delivery room with his wife, Apple, and he personally cut Jaco’s umbilical cord. He told the press that that was the happiest moment of his life.

“I wasn’t nervous going into the hospital, but I broke down into tears at the delivery room,” said Joel. On the other hand, Apple was calm throughout the delivery process, and even told Joel to relax. As expected, Jaco cried in the first minute of his life, but he soon smiled afterwards.