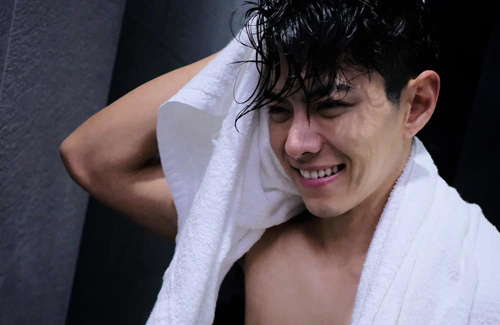 TVB actor Joey Law (羅天宇) has been capturing fans’ hearts in his drama, Girlie Days <她她她的少女時代>. His character Desmond is not only handsome and cool, but he is also not afraid to confess his feelings to an older woman. As Joey begins to gain recognition for his works, he is trying harder to shed his past “player” image.

When Joey and Roxanne Tong (湯洛雯) announced the end of their four-year relationship, fans were heart broken. When the two artistes collaborated for the travel show, Fun Abroad <3日2夜>, fans were cheering for them to get back together. Joey said, “We have a consensus and we know that we are just good friends.”

As Joey had been linked to many beautiful artistes such as Christine Kuo (苟芸慧) and Jeannie Chan (陳瀅), the media was quick to label Joey as a player who only cares about chasing women. In reality, Joey is very passionate about acting and would work hard for his career.

For his role in Girlie Days, Joey trained every day in order to lose weight and gain muscle, so he can play his character convincingly. Joey would work out by himself, even on Christmas Eve. Sadly, everyone else believed that Joey had gone to Lan Kwai Fong to party instead and Joey had to take photos to prove himself.

When he was asked why the crew didn’t believe him, Joey laughed, “Because, my image is bad. There are so many gossips about me and it gave the impression that I like to play around.”

Fortunately, viewers were able to see a different side of Joey after he starred in Life on the Line <跳躍生命線>, “After a few years, I was able to gain some recognition to a certain degree. The media started to focus more on my work and I am happy. After Life on the Line, many people can see me playing different characters and can trust me to try other roles. This allows me the opportunity to change.”

3 comments to Joey Law Comments on His Player Image