Joey Law‘s (羅天宇) name is often associated with the beautiful women he has dated in the past, such as Christine Kuo (苟芸慧), Coffee Lam (林芊妤), and Roxanne Tong (湯洛雯). Though he has been linked to many female artistes, he confessed his most memorable relationship was with Roxanne. A humble and introspective person, Joey hopes to put aside his rumors and achieve greater heights in his career.

Most Memorable Girlfriend Was Roxanne Tong 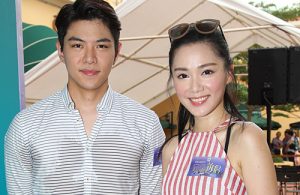 At a loss in regards to his nicknames such as “Goddess Reaper” and “The Most Fortunate Male Artiste,” Joey commented, “It is hard to control what people write. Based on a photo, they are able to make up a very convincing story. I try my best to avoid certain situations, but you can’t just avoid making friends!”

Most recently rumored with new star Chloe So (蘇皓兒), Joey said they are just friends who met over basketball and mutual friends. “We’ve known each other for a long time, and the thought of us dating has not crossed my mind.”

When asked which was his most memorable relationship, Joey said it was with Roxanne because their four-year relationship was his longest. He is happy that Roxanne has already entered a new relationship. “I’ve never worked with Kenneth Ma (馬國明), but I feel very comfortable every time I see him. I feel that he is a very good man, and I wish them all the best!”

Joey has not met his Ms. Right, but hopes to continue focusing on his career. Once he has some achievement, then he will be able to concentrate on relationships.

Turning his former exasperation for media gossip into greater fuel for working harder, Joey said, “I used to really care about what the media wrote–how could they just make up a story? Now, I place all of my time and effort into work. I’ve been working on improving myself. I’ve been learning how to sing and one day, I hope to be given the opportunity to sing drama theme songs. I also want to learn martial arts.”

With his performance in Hong Kong Love Stories <香港愛情故事>, Joey hopes to be able to change the audience’s perception and not just focus on his romantic rumors. Hong Kong Love Stories has a very relatable script, where he plays the oldest son of the Chan family who lives in public housing and is having trouble finding his own place before getting married.

Since this is the first time he has worked with Katy Kung (龔嘉欣) and they were not familiar with each other on a personal level either, it was difficult to act as a couple in a seven-year relationship. Their second scene together was an intimate one in a love motel. Joey stated, “It was obviously awkward in the beginning–it was worse for Katy because she had to initiate in that scene.” The scene was more provocative than Joey thought, and he had wondered whether it would be okay to air on television, however filming such scenes brought them closer and helped relax them for the remainder of the filming.

Seeing parallels with his character, the 33-year-old actor said, “It was easy to fall into character because I’m currently working hard to save up money to buy a home. I am going through the same problems as my character.”

Wants to Provide for Mother

Surprisingly, the media reported that Joey is a rich second generation as his mother owns two successful restaurants. Exasperated, Joey denied this and wonders how the rumor came to be. Pointing out that his apartment is a rental, he and his younger brother Wu Fei (胡㻗) are currently saving up money to make a down payment.

Growing up in a single-parent household, Joey’s biological father left the family when he was four months old. He has taken on his mother’s last name since. He wonders about the past, and is curious about his father. “I want to find him and ask him what happened. But every time I talk with my family, they don’t seem to want to talk about it, so I never push it further.” He currently has no contact with his father and does not know where he is. Hearing that his father may be living in Australia, Joey previously thought of travelling over to find him, but realized it might be hard as they have no contact.

Asked whether he hated his father for leaving, Joey thought for a moment before answering, “I’ve already let it go. There is no hate, but rather a curiosity. I really want to know why he left us.”

Though she had gotten married, Joey’s mother has already separated from his stepfather. As she is all alone now and only has her two sons, Joey hopes to be able to live together in the future. “My mother has taken care of us for so many years, so now I want to be able to take care of her and to spend time together. I don’t want her to be alone.”

He hopes that his future wife will want to live with his family, but understands that not everyone may like this arrangement. If his partner refuses, he will still stand by his mother’s side and hope to persuade his partner. “If she is filial, then I hope that she will take care of my family and get along with them. It’s a bonus if she likes animals.”