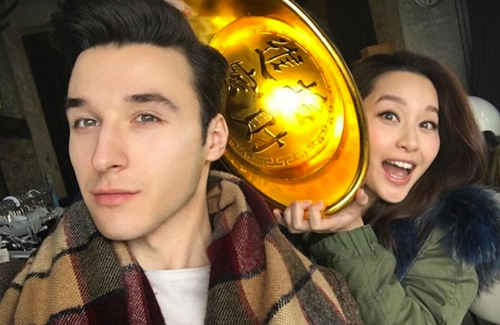 A young European model, Moni Demirov, caught the Hong Kong paparazzi’s attention when he called his Instagram followers to follow Kate Tsui (徐子珊), who recently joined the Instagram world. Reporters found that Moni has uploaded many selfies of the two together, including some with Moni hugging the 36-year-old actress and traveling to Spain together.

Moni, however, denied dating Kate, stressing that he is still single. Emphasizing that he is Kate’s work partner, he said a relationship with Kate is “impossible.” On her way back to Hong Kong from Kuala Lumpur, Malaysia, Kate too denied their dating rumors.

Mentioning that Kate and Moni went on a trip to Spain together, she said, “We traveled there together as friends!” (You guys looked very close on Instagram.) “Of course we’re close. We’re sisters.” (So no dating?) “He’s my sister. Would you think that’s possible?”