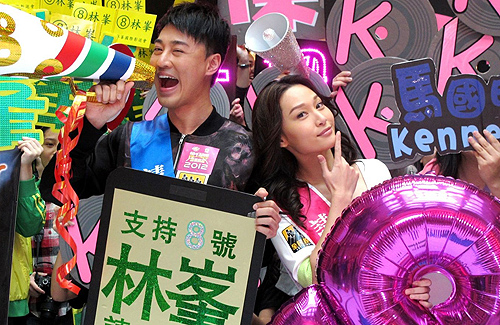 With the 2012 TVB Anniversary Awards nearing quickly, this year’s hot contenders for Best Actor and Best Actress put in all efforts to pull themselves more votes with the new one-vote-per-person system in action.  Kate Tsui (徐子珊), Raymond Lam (林峯), and Kenneth Ma (馬國明) appeared at a Tsuen Wan event for a last campaign for votes before the awards ceremony, which will take place on Monday, December 17.

Kate Tsui: “I Don’t Have an Award Speech Ready”

Kate appeared at the votes campaign in a costume from her current drama. “I returned from work in Macau last night, and I had to film for a drama this morning. I am very sleepy right now, but the shouts from my fans woke me up instantly!” Kate told the media. Is she going to win Best Actress for sure this year? “No, there are so many uncertain factors. I don’t even have an award speech ready. Whether I win or lose, I still need to find something to say!”

Although Raymond arrived at the votes campaign the latest, he had the most fans. The fans even made handfuls of bright yellow flags with Raymond’s name on it for him to give out to passersby.

Full of confidence, Raymond said, “I was already in the top 5 nomination for Best Actor when I was in my twenties. It is now time to actually receive something! I have confidence, and at the same time, my fans are giving me a lot of support. I am satisfied with my role as Happy Sir, so it is good timing right now!”

Raymond laughed and continued, “I try to pull votes for myself whenever possible. Earlier, I saw Eason Chan (陳奕迅)’s mom, and I said to her, ‘Hi auntie, I am number 8 Lam Fung!’ She asked me, ‘Is Lam Fung not your real name?’ She thought that my name is ‘Number 8 Lam Fung!’”

With this event being his last chance to campaign for votes, Kenneth exclaimed, “The company comes up with these vote campaigns because they want noise, and their goal has been reached!” When it was mentioned that many netizens are showing their support for him, Kenneth said that he has heard about it and that the netizens believe he can even top Raymond.

Although Raymond’s fans seem to be dominating the event, Kenneth remarked, “I will take everything easily. The voting results are hard to predict.” Is TVB giving Kenneth an advantage for letting you attend the event? “Many other artists are busy at work. It is not an advantage aimed at me.”

The exciting 2012 TVB Anniversary Award results will be unraveling itself on Monday evening.