Kate Tsui Will Be Gang Raped in “Highs and Lows” 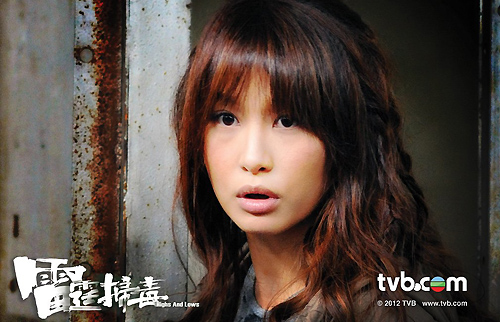 Veteran actor, Lee Ka Ding (李家鼎), will portray one of the rapists in Kate’s violent gang rape scene. Kate said, “Yes, it’s a very terrifying and pitiful situation.” Aside from dealing drugs, Kate will also be addicted to drugs. “I have a scene in which my drug addiction will kick in. My tears and snot will rush forward.”

Although Kate has portrayed a police officer in five dramas in the past, Kate’s current drug dealer role is an acting challenge and marked departure from past typecasting. Before filming Highs and Lows, Kate researched drug-intake and learned how to play drinking games to make her onscreen performance more realistic. Hoping that her character will create more “noise” leading to additional money-making opportunities, Kate said that she will be filming a mainland Chinese drama later.

After Ella Koon signed a three-year contract with Warner Music for a reported $6 million HKD figure, it was rumored that she had offended TVB. Warner Music has been engaged in a dispute with TVB since 2009, in which it proposed raising the royalty tax that TVB must pay for broadcasting use.

Ella’s scenes have been completely cut from Highs and Lows promotional trailers, which feature Kate Tsui prominently instead. Regarding this, Ella shakily said, “TVB has treated me very well. I hope they will not cut my scenes! My company has asked the producer, who said that my scenes were not cut!”

The majority of the cast members wore bulletproof vests and carried guns yesterday, speaking of their roles in the drama. After breaking into “good” versus “evil” teams, the cast played firing and dart throwing games. The “good” team, consisting of Raymond Lam and Ella Koon, lost in the contest and had to stand beneath balloons which were popped above their heads, showering them in confetti.

Jayne: Kate’s character design does stand out more than Ella’s role. However, Kate’s media exposure this year has not been as strong, compared to last year’s Lives of Omission, when it aired.

We’re almost heading towards October and aside from Tavia, Kate may make a good competitor in the upcoming TVB Anniversary Awards, from TVB’s standpoint.