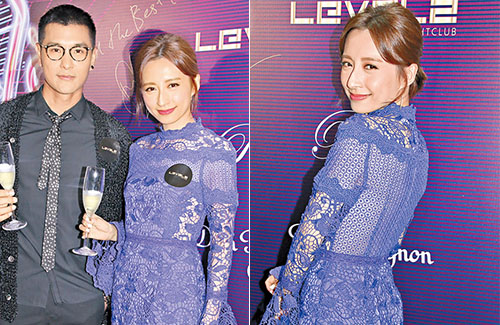 Last month, TVB actors Ruco Chan (陳展鵬) and Katy Kung (龔嘉欣) attended an event together for a nightclub in Lan Kwai Fong. The 27-year-old actress, who has been single for a few years, looks forward to spending a night at the club with close friends Grace Chan (陳凱琳), Zoie Tam (譚凱琪), and Jess Sum (沈卓盈), her costars in The Forgotten Valley <平安谷之詭谷傳說>.

“We thought about going to Lan Kwai Fong together before, but we were worried that it’ll attract attention,” said Katy. “Now I can finally have fun with a VIP pass.”

Asking if she and her friends would hold birthday parties in Lan Kwai Fong, Katy said, “I’ve always worked on my birthdays. I haven’t had a break in a while. I’m really happy that I get to have fun today.”

Though Katy is still single, she is not interested in meeting new guys at the club. She professed that she is very lightweight, despite going through a tolerance training with her father. “I go to sleep after drinking a glass. My younger sister is actually a very good drinker. My future boyfriend would have to be a good drinker, so he can protect me,” she added with a laugh.

Ruco Chan was once criticized for wearing an outdated black cardigan at an earlier event. He chose to wear the same knitted cardigan at the Lan Kwai Fong event, saying, “This cardigan is actually from this year! Maybe the brand is rather vintage, or perhaps I just didn’t look good in it. If I always follow the trend then that won’t be interesting.”

When asked for Ruco’s thoughts about his own style and fashion sense, he said, “It takes time to get along with the trend. Wyman Wong (黃偉文) once said, ‘There are things that can be wrong, but wearing clothes cannot be. wrong.’ If it doesn’t look good, I’ll try to improve the style next time. I’m also just an actor. I’m not very good with fashion, but I hope to improve with each appearance.”

Asking if his girlfriend, Phoebe Sin (單文柔), would help him out with picking clothes, he said, “Yes. My mother also has a very good eye, so sometimes I’ll consult her.”