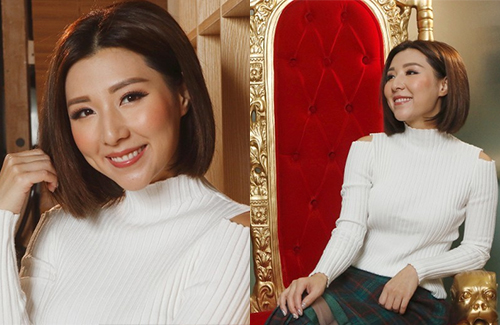 Kayee Tam’s (譚嘉儀) English language single “Can You Hear” is the most popular song of 2019, and she feels the pressure.

The song, which was part of the OST for TVB’s Big White Duel <白色強人>, broke 6 million views within five months on YouTube, making it one of the most popular Hong Kong-based music videos of the year.

“I wasn’t expecting this,” said Kayee. “It took only a few months to break that number. It’s shocking but also very encouraging!”

Though still a month away from the 2019 Jade Solid Gold Awards, netizens are already touting “Can Your Hear” to be Song of the Year. Kayee said, “The views are there, but you never know what will happen. I’m already very happy and satisfied with the views. I don’t want to expect too much. I don’t want to be disappointed in the end!”

The “Can You Hear” music video is reportedly the most viewed video by a Hong Kong singer-songwriter in the past two years. “I do feel very lucky,” said Kayee. “I have some friends who thought the song was originally by a foreign artist. I was actually very happy to hear that. It’s great that I get to sing an English song in Hong Kong, and for it to be well-received by audiences.”

Kayee’s cover of Lowell Lo’s (盧冠廷) “Walk With You” <陪著你走> in 2017 has broken 3.6 million views, while her recent singles “Why Don’t You Find Me” <怎麼你不找我> and “Goodbye” <今宵多珍重> have received positive ratings. “Goodbye” is the theme song for TVB’s Barrack O’Karma <金宵大廈>, and is also the cover of Danny Chan’s (陳百強) 1982 song of the same name.

“Danny Chan gor gor’s version left deep impressions on people, and I was under great stress when I recorded it,” said Kayee. “I didn’t know how to perform it in a refreshing way, which was why the producer made two versions.